SEOUL (AFP) - Angry relatives of sailors killed in the 2010 sinking of a South Korean warship protested on Saturday (Feb 24) against the impending visit to the Winter Olympics of a North Korean general blamed for the attack.

Relatives of the 46 killed on the Cheonan corvette urged Seoul to scrap the visit by Kim Yong Chol who will head an eight-member delegation at the Games' closing ceremony Sunday.

Kim is widely blamed for a spate of attacks against the South including the torpedoing nearly eight years ago of the corvette. He has also been linked to the shelling of the South's Yeonpyeong island the same year, which killed four people.

"Execute Kim Yong Chol," chanted a group of some 30 relatives of the Cheonan victims at a rally in a Seoul city centre square.

"North Korea accept the responsibility for the atrocity and apologise," they shouted, waving banners and portraits of Kim marked with a red cross. 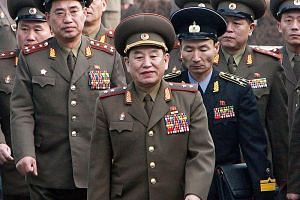 "We can never allow a visit by a Hitler-like war criminal, the main culprit of the attack against the Cheonan," party leader Hong Joon Pyo wrote on his Facebook account.

Thousands of demonstrators staging their weekly protest for the release of jailed former president Park Geun Hye also threw their weight behind the campaign against the controversial visit, calling for the general's arrest and execution.

Unification ministry spokesman Baek Tae Hyun has said the government was aware of widespread misgivings about the visit, but accepted it as the "chances for improving inter-Korean ties and a peace settlement might be improved".

Seoul blames the North for the sinking of the Cheonan - widely believed in the South to have been ordered by Kim Yong Chol - although Pyongyang denies responsibility.

At the time he was head of the North's Reconnaissance General Bureau, which is responsible for espionage and sabotage activities against the South.

Baek said the sinking of the Cheonan was "certainly the North's work" but it was difficult to pinpoint who was directly responsible.

The North's high-level delegation led by Kim will include foreign ministry officials who handle relations with the US and the nuclear issue, raising hopes that Pyongyang is willing to discuss the nuclear issue during this visit, Yonhap news agency said.

"We're, therefore, looking forward to a message from the North," a government official was quoted as saying.

South Korean President Moon Jae In is likely to meet the delegation but the White House ruled out the possibility of talks between Kim and US representatives.

Instead, Washington warned Pyongyang of "maximum pressure" towards denuclearisation on Saturday, hours after hitting the defiant North with what President Trump said were the "heaviest sanctions ever".

The general's visit comes shortly after North Korean leader Kim Jong Un expressed "great satisfaction" over a visit to the Olympics opening ceremony by a high level delegation which included his sister Kim Yo Jong.