In its editorial, the paper says jobs for seniors lead apparent rise in employment, but young people are worse off in reality.

According to Statistics Korea on Wednesday, the nation saw 250,000 jobs added in March from a year earlier. March was the second straight month when over 200,000 jobs were created.

Yet a closer look shows a different picture.

Without these two categories, overall employment would have shrunk by 17,000 jobs. Those in their 30s and 40s, the backbone of the nation's workforce, lost out on 250,000 jobs.

More than 160,000 jobs vanished for people in their 40s alone, an age bracket where employment dropped for the 14th month in a row.

Just as worrisome is the loss of 108,000 manufacturing jobs. This sector lost jobs for 12 successive months. 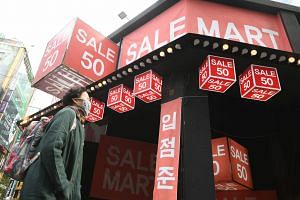 Most of the jobs created for seniors were short-term, fiscally funded and entailed performing minor public services, such as picking up trash and walking children to school.

Few would call them career jobs. Employment growth in the agro-fishery sector is largely ascribable to those who moved to rural areas after failing to find employment in the cities.

Among young people, the unemployment rate decreased slightly to 10.8 per cent, but a broader view shows it actually rose to 25.1 per cent, the highest level since 2015 when Statistics Korea began to compile related data.

The higher figure counts discouraged workers who have given up looking for jobs, as well as underemployed job seekers working part-time.

Deputy Prime Minister for Economy Hong Nam-ki viewed these job statistics as "positive signals." And the government never quits spending tax money to expand employment -- on paper. It's all looks and no substance.

In a seminar in Seoul in March, he warned that "pretend jobs" can destroy human capital. He noted the importance of creating flexible jobs to which people can move after learning skills in different jobs. He emphasised the role of the private sector in expanding such employment.

Former economic policymakers advised Moon to review his trademark income-led growth policy and deal sternly with excessive labour demands. In a meeting with Moon at Cheong Wa Dae last week, they called theirs a "humanitarian" policy for the low-income bracket, not an economic one.

The advice from Romer and the former officials is worth listening to, but it falls on deaf ears. The Moon administration defends the income-led growth concept like an impregnable fortress. Moon argued it is a "pedigreed" concept. Senior officials said the policy would pay off and asked people to trust the government and wait.

However, what people have encountered are its side effects. Sharp hikes in the minimum wage and a shorter workweek system caused massive job losses.

The Moon administration got busy pouring in taxes to make up for those lost jobs. As the employment situation worsened late last year, it spent 120 billion won ($105.4 million) in taxes to create such jobs as turning off university classroom lights and cleaning solar panels. It will inject 1.6 trillion won this year to add 600,000 jobs, mostly for older people.

As honorary chairman of the Korea Employers Federation Bahk Byong-won noted, what the government must do is create jobs that will generate taxes, not ones that use up taxes.

Given sluggish business at home and abroad, it is understandable that the government wants to do something -- anything -- like drawing up new budgets and spending taxes to create jobs for old people, however insignificant. But it cannot solve employment problems this way.

Specious jobs created to make employment appear to be growing are meaningless and detrimental to the economy because they create statistical illusions. Sustainable jobs are the right answer.

The solution is simple. Reinvigorate the economy.

This is possible only if the government changes course and raises business competitiveness by deregulating boldly and making the labor market more flexible.