Localists were expected to win a few seats at yesterday's Legislative Council (Legco) elections where a record turnout showed that Hong Kongers were more worried about their future.

Minutes before polls were supposed to close at 10.30pm, there were still long lines of people outside polling stations waiting to cast their ballots, something that analysts said has not happened before. At past 12.40am, people were still voting.

This is the first election with a sizeable contingent of candidates who are advocating self-determination and independence, noted political analyst Willy Lam.

In these high-stakes polls, if the pan-democratic camp fails to garner one-third of the 70 Legco seats, it will lose its veto power to overturn decisions of the government. But some were expecting the pro-Beijing camp to also lose some seats.

If pan-democrats and localists do much better than expected, chances of Beijing fielding incumbent Leung Chun Ying in the chief executive election in March next year may be slimmer, Dr Lam said. 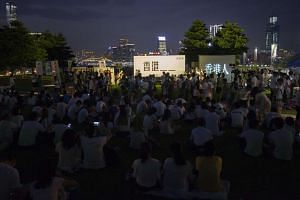 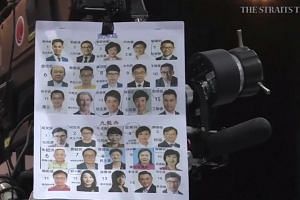 Yesterday's election was the first major one after the massive student-led protests two years ago demanding greater democracy.

The city's unpopular Chief Executive Leung inevitably became a key figure in the month-long campaign, with the opposition demanding his resignation.

Yesterday, as Mr Leung arrived at a polling station to cast his vote, he was jeered by radical pan-democrats Leung Kwok Hung and Avery Ng. Mr Ng, chairman of the League of Social Democrats, threw a tuna sandwich at the Chief Executive.

Mr Ng, 39, later told the media he had picked the "smelly" snack to let Mr Leung Chun Ying know that many people in the city cannot afford even a sandwich for breakfast.

The Straits Times spoke to several voters in the affluent Mid-Levels residential area, the majority of whom expressed hope that radical localists would not get elected as they wanted to see "peace and order" in Hong Kong.

A housewife in her 60s, who wanted to be known only as Madam Fung, said she hopes the new legislature "will unite Hong Kongers so that Hong Kong people will not be so divided (like now)".

But Mr Joseph Wong, 68, the former secretary for the civil service, said he encouraged young people to run in the race, and hoped those elected would "keep tabs" on the government. But he did not think Hong Kong's independence was the way forward.

In the less affluent New Territories, which is hotly contested by the localists, voters appeared more open to giving the young politicians a chance. Mr Ron Ng, 27, a fitness instructor, said: "There hasn't been much progress in Hong Kong, so I think we should give the young ones a chance and let them prove what they are capable of."

Actress Deanie Ip, 68, who yesterday campaigned with localist Nathan Law in Hong Kong Island, where the 23-year-old is running for a seat, said she supports Mr Law after seeing how determined he was in pursuing his beliefs.

"I hope to see a new wave of young politicians like Mr Law speak up for Hong Kongers in the legislature," she said.