From a former United Nations veteran to an ex-army helicopter pilot to a former basketball pro, the women in South Korean President Moon Jae In's new Cabinet are as diverse as can be.

With women appointed in six out of 19 positions, Mr Moon has made good his campaign promise to have at least 30 per cent women in his administration.

This is the highest figure in South Korea's democratic history. Even when the country had its first female president, Park Geun Hye, in 2012, she appointed only two female ministers.

Their appointments, part of Mr Moon's efforts to break away from traditional ways, have been applauded by many. 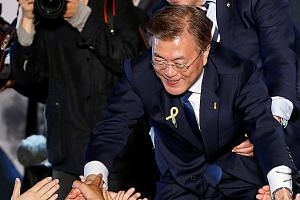 Wilson Centre global fellow Jean Lee said it shows that Mr Moon recognises the value of placing qualified women in key leadership positions, and that it will inspire future generations. "South Korea is changing, and President Moon has been a strong champion of positive change for his country," she said.