TOKYO • When North Korea's Foreign Minister took the podium last week at the United Nations General Assembly, it marked a relatively rare public appearance of a representative from the Kim Jong Un regime.

Since he arrived in New York last week, Mr Ri Yong Ho has been making headlines, comparing United States President Donald Trump to a barking dog and saying that he feels sorry for the US leader's aides.

This is the third year in a row that North Korea has sent its foreign minister to the General Assembly and the first attendance for Mr Ri, who was appointed last year.

Although the Foreign Ministry has relatively little influence, compared with security agencies in North Korea, experts say Mr Ri holds a special position in the regime.

Mr Ralph Cossa, president of the Pacific Forum of the Centre for Strategic and International Studies,said Mr Ri "is one of the few people that we come into contact with who is also believed to talk to Kim Jong Un".

Writing in the Atlantic website, former US Department of State official Joel S. Wit said: "A meeting with Foreign Minister Ri would be an important opportunity for the Trump administration to directly communicate its views to a North Korean official with ties to Kim Jong Un."

Mr Ri is the son of Ri Myong Je, who was editor of the Korean Central News Agency, a regime mouthpiece, and was a close aide to late leader Kim Jong Il. That makes Mr Ri "a bona fide princeling", according to the North Korea Leadership Watch website. Thanks to this blue blood, Mr Ri, who is about 63, has enjoyed a number of high-level positions in the North Korean regime.

Mr Ri began his career at the Ministry of Foreign Affairs in 1978, six years before current leader Kim Jong Un was born.

For nearly 20 years, he has been one of the central diplomatic managers of the country's relations with the US and has been a primary interlocutor with representatives of the US during official and unofficial "Track 1.5" talks, North Korea Leadership Watch says. 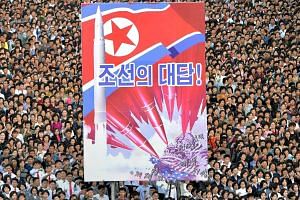 Mr Ri at one point served as his country's chief negotiator in the six-party talks on North Korean denuclearisation before the talks were stalled in December 2008.

"One of Kim Jong Un's best decisions was appointing Ri Yong Ho as foreign minister," said Mr Thae Yong Ho, a former deputy ambassador at the North Korean Embassy in London who served under Mr Ri while he was ambassador there. Mr Thae defected to South Korea last summer.