Call for calm amid reports of activity; US adviser warns of tighter sanctions

Reports that North Korea has started rebuilding part of a dismantled rocket launch site set off alarm bells yesterday, just as US national security adviser John Bolton warned that Washington may tighten sanctions if Pyongyang refuses to give up nuclear weapons.

The turn of events came after US President Donald Trump and North Korean leader Kim Jong Un failed to reach an agreement during their summit talks in Hanoi last week.

Analysts urged calm, stressing that no ballistic missile has been fired from the Tongchang-ri rocket launch pad near the border with China and that there are no signs yet that the North is preparing for any kind of provocation.

South Korea's intelligence agency told Parliament during a briefing on Tuesday that it detected signs of the North rebuilding part of the Tongchang-ri facility, also known as Sohae. A door and a roof appear to have been restored, Yonhap news agency reported.

The site was partially dismantled as a goodwill gesture last August, two months after the leaders agreed at their first summit, held in Singapore, to build new ties and work towards the complete denuclearisation of the Korean peninsula.

The Washington-based think-tank Centre for Strategic and International Studies then released satellite images of the site taken last Saturday, saying that construction activities were detected at a launch pad and an engine test stand.

The observations were echoed by North Korea monitoring website 38 North, which said in an analysis that "efforts to rebuild these structures started sometime between Feb 16 and March 2, 2019".

But this "only shows construction... not anything that would indicated test prep", Ms Jenny Town, managing editor of 38 North, which is managed by the Washington-based think-tank Stimson Centre, said on Twitter. "No ballistic missiles have ever been launched from the launch pad at Sohae... It has only ever been used for satellite launches," she added.

Centre for Nonproliferation Studies senior research associate Dave Schmerler tweeted: "Before we start racing towards impending 'ICBM' (intercontinental ballistic missile) launches out of Sohae, let's take a breather and wait for more imagery... this recent uptick in activity is more likely a move to apply soft pressure on the US after Hanoi."

Dr Shin Beom-chul of the Seoul-based think-tank Asan Institute for Policy Studies told The Straits Times that North Korea would not risk staging a provocation if it still wants to engage in talks with the US. "They are just trying to shake the Trump administration into coming back to the negotiating table." 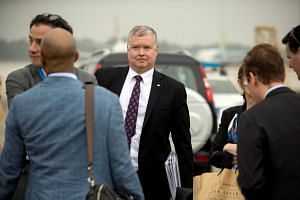 Dr Hoo Chiew Ping of National University of Malaysia said it was a "timely action post-Hanoi". "The Kim Jong Un regime is clearly unhappy. Hopefully this is a signal to the US to indicate willingness to continue negotiation, so as to prevent renewed interest in restarting provocations," she told ST.

The US, meanwhile, appears to be dialling up pressure on North Korea.

Mr Bolton, known as a hardliner, told Fox Business Network on Tuesday that if North Korea was not willing to give up its nuclear programme, "they're not going to get relief from the crushing economic sanctions that have been imposed on them, and we'll look at ramping those sanctions up in fact".

Experts urged against reading too much into Mr Bolton's words.

"He has never taken a constructive approach to North Korea negotiations, and he never will," former State Department official Mintaro Oba told ST. But he also warned that Mr Bolton "can do a lot of damage... whether it's by inflating President Trump's expectations to create greater room for perceived failure, convincing Trump that taking further bold steps will make him look bad, or encouraging negotiating positions that will end in failure".

Dr Shin said Mr Trump might be using his security chief to pressure the North to provide a road map towards denuclearisation.

"Tension will go on for a while. Both sides need to cool off and rethink their negotiating strategies."