In its editorial, the paper says the reunion of families separated by war must not be a one-time event.

SEOUL (THE KOREA HERALD/ASIA NEWS NETWORK) - South and North Korea fixed the schedule and scale of a reunion event for families who were separated during the Korean War.

The agreement came in their Red Cross talks at the Mount Geumgang resort in North Korea on Friday. Each side will choose 100 people to meet at the resort from Aug. 20-26.

It will be the first family reunion since October 2015.

Among various reconciliation measures sought after recent dialogues between South and North Korea and between the US and North Korea, resuming family reunions means a lot to the two Koreas.

Though South and North Korean leaders in their April 27 summit at Panmunjeom agreed in principle to hold a family reunion event, it is fortunate that working discussions on related details have concluded smoothly.

And yet they ended in a half-baked agreement as the North showed a passive attitude again this time on more fundamental solutions, such as regularising the event.

It must know that meeting family members is not a matter of ideology or politics.

Family reunions have thus far not been enough for separated families because they take place depending on inter-Korean situation. 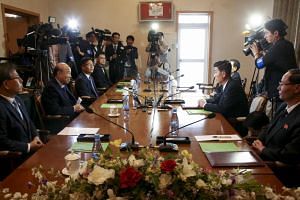 This manner of reunion must be changed fundamentally.

Families dispersed in South and North Korea are racing against the clock, waiting eagerly for a chance to meet.

Even if a rare opportunity was given, however, very few met their spouses, parents and children.

If at most hundreds could meet their families in just a one-off event which can happen solely depending on the North's good intention, it will be impossible for all the other separated families to fulfill their lifelong dream of being reunited.

According to the Integrated Information System for Separated Families, run by the Ministry of Unification, a total of 132,124 people have been registered as separated family members as of late last month.

The authorities particularly in Pyongyang must not close their eyes to a pitiful reality where thousands of separated family members die of old age each year without meeting their kin.

Their hope is no doubt to meet their family members, but more important than that now is to know if they are still alive.

Census of all separated families is urgent.

Knowing if families are alive is the basis of family reunion and the minimum solace for them.

The family reunion center in the Mount Geumgang resort must be open at all times for regular meetings of separated families.

Second and third such centers need to be constructed.

Separated families must be allowed to keep correspondence through mail and visit their hometowns.

Both Koreas should try to establish diverse channels for more families to meet more often.

In order for all separated families to have a chance for reunion at least once, according to a study released last year, a minimum 7,300 people should be reunited with their families each year.

For those over 70, at least 6,900 of them should be given a chance for reunion each year.

Family reunion is a top priority issue to be solved from a humanitarian point of view.

South Korea has so far demanded a full-scale census of separated families to know if they are alive, but the North has given a half-hearted response.

Eyes fell on whether the North would make tangible progress about such a census in the latest Red Cross talks, but, regrettably, they were not different again this time. The matter of a census was excluded from the accord.

However, now that both sides agreed to keep dealing with humanitarian issues through further talks, they will have to try to work out fundamental solutions, not settle for a one-time event.

The North must show a more active and forward-looking attitude, too. It must not turn its face away from the pain of families torn asunder for 68 years now by the war.

There is no time to lose.