She pledges economic reforms, even as protesters stage airport sit-in and gear up for more rallies

HONG KONG • The protests in the territory could hit the economy like a tsunami, the city's leader said yesterday, pledging daring economic reforms in response, even as activists geared up for marches through the sweltering weekend.

Flanked by business leaders, embattled Chief Executive Carrie Lam told reporters that businesses in the Asian financial hub were very worried about the economic fallout, after she met 33 business representatives and senior officials.

"We have had two months of political dispute," she said. "This is not a cyclical downturn. Moreover, this downturn is coming very quickly. Some people have described it as coming like a tsunami... The economic recovery will take a long time."

What started as an angry response to a now-suspended measure for criminal suspects to be extradited for trial in mainland Chinese courts has grown to plunge the city into its biggest crisis since its 1997 return to Chinese rule from Britain.

More nebulous demands now include calls for greater democracy, Mrs Lam's resignation and even to keep out mainland tourists.

Protesters have continued to stage almost daily rallies despite increasingly violent confrontations with police that have prompted several countries to issue Hong Kong travel warnings for their citizens.

The protests also pose one of the gravest populist challenges yet to Chinese President Xi Jinping, coming with the city caught in the crossfire of an escalating trade war between China and the United States.

Dozens of companies have warned of faltering earnings, amid daily warnings this week from city officials that the protests were hurting residents' livelihoods and that Hong Kong could be headed for a recession.

Another warning came from China's aviation regulator, which issued a safety alert to Cathay Pacific Airways demanding that the carrier suspend personnel involved in protests. 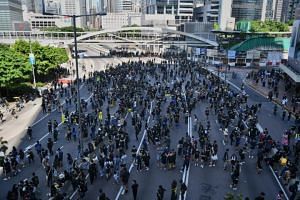 Ex-top cop recalled from retirement to help deal with violence

Mrs Lam said the Executive Council's next meeting will be brought forward by half a month to Tuesday as it prepares a policy response that would consider "daring measures".

"For Hong Kong's society to recover, the foundation is the same (as that of the economy)," she said. "We must stop the widespread violence."

She urged landlords to ease rents on hard-pressed retailers, but said she would give no ground on demands for an inquiry into police behaviour at demonstrations.

Soaring property prices have pushed up rents and had a knock-on effect on the prices of goods and services. Last year, Oxfam said the city's income inequality was at its highest in more than four decades.

Hong Kong's powerful property developers spoke out for the first time yesterday, urging calm in a statement signed by 17 companies.

Young people have been at the forefront of the protests, worried about China encroaching on Hong Kong's freedoms, but also concerned with issues such as sky-high living costs and what many see as an unfair housing policy favouring the wealthy.

Yesterday, thousands of pro-democracy protesters staged a sit-in at the airport to bring their message to arriving visitors.

Waving banners in a dozen languages, they handed out anti-government leaflets in a bid to raise awareness among visitors.

"Dear travellers," read one leaflet in English. "Please forgive us for the 'unexpected' Hong Kong... You have arrived in a broken, torn-apart city, not the one you have once pictured. Yet for this Hong Kong, we fight."

Protesters also sang Do You Hear The People Sing? from the musical Les Miserables, and chanted the phrase "Hong Kongers, add oil!" - a popular exhortation in Cantonese.

There was no visible police presence. One protester, Ms Charlotte Lam, 16, told Reuters: "It will be a peaceful protest as long as the police do not show up.

"We want to spread our mes-sage internationally. We are not rioters, we are a group of Hong Kong people fighting for human rights and freedom."

Larger marches are planned across Hong Kong Island, Kowloon and the New Territories at the weekend, where protesters could see a shift in police tactics.

A version of this article appeared in the print edition of The Straits Times on August 10, 2019, with the headline 'Protests could have tsunami effect on economy: HK leader'. Subscribe
Topics:
More
Whatsapp Linkedin FB Messenger Telegram Reddit WeChat Pinterest Print Copy permalink