SEOUL - Prosecutors said they based their interim report partly on information they collected from the notebooks, diaries and cellphones of former presidential aides. An Chong Bum and Jeong Ho Seong were indicted yesterday while others have been summoned for questioning.

A look at how President Park's closest aides were allegedly involved in the massive influence-peddling scandal.

The former senior secretary for policy coordination is charged with power abuse and extortion. The prosecution said that An and President Park's close friend, Choi Soon Sil, pressured 53 companies to donate a total of 77.4 billion won (S$93.5 million) to two foundations controlled by Choi.

Ms Park, according to prosecutors, ordered An to arrange one-on-one meetings with the chiefs of seven of the nation's top conglomerates to urge their "donation" for the foundations. 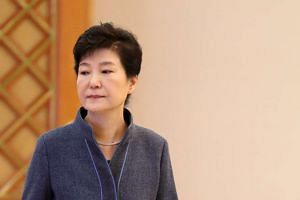 The former presidential private affairs secretary is accused of leaking around 180 presidential documents to Choi from 2013 until April this year.

Among the documents, 47 contained classified information, including the candidate lists of the President's minister and vice-minister nominees. An audio file found on Jeong's mobile phone has Ms Park telling him to pass documents to Choi and find out what she thought, reported Chosun Ilbo.

Like Jeong and An, Ahn and Lee resigned not long after the scandal broke last month.

Ahn and Lee are among her most trusted aides, having worked for her for 16 years.

Both are accused of helping Choi, a private citizen with no security clearance, visit the presidential Blue House.

The former senior presidential secretary for economic affairs is accused of having pressured Milky Lee Mie Kyung, granddaughter of Samsung founder Lee Byung Chul, to step down from management of CJ Group. He reportedly said the move was an order from the President, according to Yonhap news agency. CJ Group reportedly rejected requests for Choi's friend and music-video director Cha Eun Taek to be given the top posts at the two projects operated by the group.

The former senior presidential secretary for civil affairs has been blamed for failing to prevent Choi from influencing state affairs.

He is embroiled in separate corruption allegations surrounding his family.

The former presidential secretary for education and culture was questioned over allegations that he gave undue favours to the Choi family, reported local media.