By introducing new details unknown of in the past to Article 104 which covers Legislative Council (Legco) members' oaths, in an attempt to ban two pro-independence lawmakers from the council, Beijing effectively changed the Basic Law, Democratic Party lawmaker James To said at a press conference.

Civic Party lawmaker Dennis Kwok who was also present, echoed the same sentiment. Representing the legal sector, Mr Kwok said the legal fraternity will not accept the Chinese ruling as it goes beyond interpretation of the law. The interpretation is being used as a disguise for the central government to intervene in Hong Kong and how the city should be run, he added.

In handing down its interpretation of Hong Kong's Basic Law yesterday, the National People's Congress (NPC) Standing Committee said lawmakers must swear allegiance to Hong Kong as part of China. Candidates would be disqualified if they changed the wording of their oath of office or if they failed to take it in a "solemn and sincere" manner. The NPC also stated clearly in an eight-page document distributed to the media that pro-independence activists will not be eligible to run for the legislature or be sworn in as lawmakers.

Yesterday's announcement marks the fifth time Beijing is interpreting the Basic Law, with the rare move sparking fears that China is tightening its grip on the city. 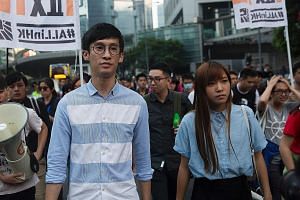 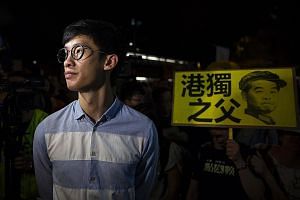 Pro-independence duo may take cause back to streets 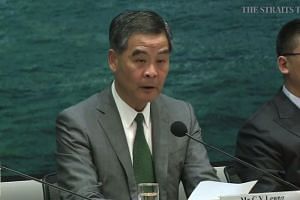 Hong Kong's oath-taking case: What to know about China's interpretation of Basic Law

The pair from political party Youngspiration had also pronounced China as "Cheena" in the swearing-in oath, which was deemed demeaning to China. Their act resulted in Legco president Andrew Leung declaring their oaths invalid.

While some people might find the pair's behaviour and pronunciation of China offensive, Mr Teddy Wong does not think so.

"I find them immature, but it's just their way of pronouncing China. I don't feel offended at all," said Mr Wong, 47, a civil servant.

He also does not blame the pair for triggering Beijing's interpretation of the Basic Law.

He told The Straits Times last night: "If not them, the central government may find another excuse to intervene. They are not fulfilling their promise to respect our One Country, Two Systems framework." The framework under which Hong Kong returned to China's fold in 1997 gave the city a high degree of autonomy.

"By handing down their interpretation of the Basic Law, they are clearly destroying Hong Kong's independent judicial system," said Mr Wong.

Analysts have warned of more unrest in the days ahead. The police force is on high alert and is stepping up measures in anticipation of trouble from angry protesters. But the streets were unusually quiet yesterday, with lawmakers voicing their views at press conferences.

It was a stark contrast to the scene on Sunday when more than 13,000 angry protesters took to the streets, up in arms over Beijing's intervention in the oath-taking controversy.

The protest march, which started at 3.30pm in Wan Chai district, ended at the Chinese liaison office instead of the planned destination of the Court of Final Appeal after the organisers changed the route.

Clashes broke out between police officers and some 4,000 protesters outside the liaison office, with police using pepper spray to drive back protesters.

Demonstrators retaliated by opening umbrellas and hurling plastic bottles at the police, a scene reminiscent of the Umbrella Movement in 2014, a 79-day pro-democracy protest.

By 10pm, the crowd had split into groups, taking up positions at different spots along the tram track behind the Chinese liaison office and facing police officers clad in riot gear.

Traffic was forced to a standstill and tram drivers had to wait out the confrontation inside the trams.

Masks and umbrellas were distributed to the protesters, most of whom were dressed in black.

Young men in hoodies and black masks weaved through the crowd, moving heavy objects like dustbins and wooden planks in front of the police squad, forming makeshift barricades. The police in turn looked ready to charge at the crowd.

The stand-off lasted almost eight hours but, by midnight, only about 2,000 protesters remained.

Many appeared tired and bored. Some were walking around talking on their phones and taking selfies with police officers behind them.

Around 10 minutes to 1am, the police officers moved in. Holding up shields, they moved towards the protesters, forcing them to retreat.

In less than one hour, a special police squad armed with batons managed to chase the remaining protesters out of the area. Roads were reopened and traffic was back to normal by 3am.

Four people were arrested and two police officers were injured during the clashes.

"There could be more violent protests in the days to come, when the two lawmakers (from Youngspiration) are stripped of their legislators' status," said political analyst Willy Lam.

"A by-election is expected to be held in three months' time. If another localist activist is allowed to compete and loses in the by-election, that would set the stage for an even bigger confrontation, much bigger than Sunday's protest," he said.

However, while Beijing expects more protests, it is unlikely to back down, said Professor Lau Siu Kai of the semi-official Chinese Association of Hong Kong and Macau Studies. "Beijing is determined to prevent the legislature from being used as a platform by the independence activists," he said.

A version of this article appeared in the print edition of The Straits Times on November 08, 2016, with the headline 'Prelude to a bigger clash?'. Subscribe
Topics:
More
Whatsapp Linkedin FB Messenger Telegram Reddit WeChat Pinterest Print Purchase Article Copy permalink