For one heavily pregnant woman in Hangzhou, the capital of China's Zhejiang province, it meant remaining motionless for five days to delay the delivery of her baby.

Local media reported that the woman, surnamed Xu, had been due to give birth on Dec 26 last year.

But with the country's long-standing one-child policy still in effect then, she adopted the unusual method in a bid to avoid incurring the hefty penalty.

She finally gave birth to a baby girl on Jan 2.

"The pain started on the night of Jan 1, so we rushed her to the emergency room of the hospital," her husband said.

There have already been several reports of women taking extreme measures to delay the birth of their second child only until the new policy kicked in.

In Fujian province, the family of a woman, who had been suffering from cramps since Dec 27, monitored her around the clock to prevent her from popping "ahead of time".

She eventually gave birth on Jan 1, with the family celebrating by giving the baby girl a nickname - Little Bawan. "Bawan" means 80,000 in Chinese, which would have been the fine amount they had to pay if she had been born in 2015.

China's introduction of its new two-child policy - after decades of restricting couples to one child - on Jan 1 is expected to lead to a baby boom. 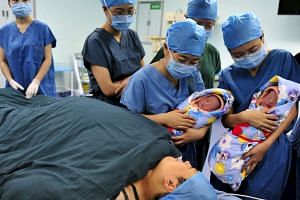 But it has also generated some controversy.

According to the BBC, female staff at a company in Jilin province's capital of Changchun are being made to "apply" to have children a year in advance.

Managers said they hoped this would prevent the firm from becoming short-staffed as many female employees had said they were eager to take advantage of the policy and have a second child.