HONG KONG - With two weeks to go before the school term starts in Hong Kong, a group of secondary school students have indicated in a poll that they are willing to boycott classes and continue protesting against the government.

Nine in 10 of the respondents in the survey, which was released on Friday (Aug 16) by pro-democracy party Demosisto and two student organisations, said they supported a campaign to boycott classes "to express their concerns on the social injustice and show their determination for democracy in Hong Kong".

Three in five said they preferred the class boycotts to start on Sept 2, the opening of the new school term.

More than half said they would "join class boycotts", while a fifth would "attend assembly after school". The remaining 30 per cent indicated they would use alternative ways, such as wearing ornaments, to show their support even though they may not join the campaign.

Two in five supported the idea of an "indefinite class boycott".

The majority, however, preferred either "on-campus assemblies" or "public assemblies in multiple districts".

To facilitate this, the three organisers of the survey said they would identify suitable venues on Hong Kong island, Kowloon and the New Territories for three public assemblies, to be held concurrently with assemblies in schools.

Almost 19,500 secondary school students took part in the poll and most, or more than 70 per cent, would be in Form 4 (the equivalent of Secondary 4 in Singapore) or higher in September.

To ensure that public assemblies take place in a peaceful manner and more students can join the campaign, the organisers said they would apply for letters of no objection from the police. 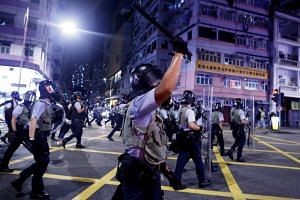 They urged students, parents and alumni to form individual preparatory committees to spread information among members of the school and to "develop their boycotting strategies".

The plan was criticised by Secretary for Education Kevin Yeung who said the Education Bureau and schools are against the idea of a boycott when the school term starts. Students, he said, should be protected from politics.

"We understand that students may hold different opinions for social issues, but there are appropriate ways to express their views," he wrote on Facebook.

The poll comes against the backdrop of growing unrest in the city after Chief Executive Carrie Lam tried to push through a highly contentious extradition Bill.

Opponents said the Bill would allow suspects to be sent to mainland China where they would not receive fair trials.

Faced with mounting opposition, Ms Lam decided to suspend the legislation indefinitely but the protests, which began in March, have continued.

Protesters are now demanding, among other things, the full withdrawal of the Bill, an independent probe into alleged police brutality and universal suffrage in the territory.