The acrid but familiar smell of tear gas wafted across parts of Hong Kong yet again as protests held in multiple districts yesterday stretched into the night.

Police faced off with masked protesters at suburban Tai Wai in Sha Tin and at the popular shopping district of Tsim Sha Tsui, while flash mobs blocked roads and the Cross Harbour Tunnel using makeshift barriers before they were cleared with tear gas.

The clashes followed an illegal march at Tai Po earlier in the afternoon, which drew hundreds even after police had rejected applications for all four marches planned by organisers for the weekend.

Mr Roy Chan, one of the Tai Po march organisers, told the Hong Kong Free Press that the police ban meant "our freedom to protest and demonstrate has been completely destroyed".

While the march was officially cancelled, he called on Tai Po residents to "do what they should do".

Shops along Nathan Road in Tsim Sha Tsui shuttered earlier than usual at around 8pm, after protesters amassed to block traffic and attempted to surround the nearby Yau Tsim District police station.

The area, a popular shopping district, became a stand-off zone for almost two hours after riot police charged at the crowd and arrested a teenage girl who was shouting slurs at the officers.

The crowd then swelled and the protesters, chanting slogans, advanced even as police returned to the station. This prompted several rounds of tear gas as officers tried to disperse the crowd.

Protesters called repeatedly on the police to release the teenage girl, and said that officers had used excessive force in the arrest. 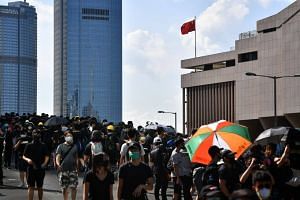 "It is the same story of excessive force, the girl was a bystander who had no mask or protest gear," said waitress Macy Fong, 19, who was clad in black and wore a mask. "If the police wanted to make an example of someone, they should be trying to arrest one of us instead."

Hong Kong has been brought to a standstill by relentless protests in the last two months, as protesters demanded the total retraction of a controversial extradition Bill, and an inquiry into police brutality, among other things.

Approved protests held earlier in the day at Victoria Park and Edinburgh Park were peaceful, and drew several hundred families, who turned out to show their support for pro-democracy protesters.

Older people did their part in staging a "silver hair" rally, delivering letters to police headquarters and the office of Chief Executive Carrie Lam in support of the protests.

But footage from broadcaster TVB also showed supporters of the police - mostly dressed in light blue - delivering fruit baskets and cards to officers, as groups posed for pictures with officers while holding mini Chinese flags.

The illegal march at Tai Po marked a turning point yesterday, as activists tried to barricade roads and marched towards the heavily fortified police station there before splitting off to join up with other protesters in Sha Tin and the Cross Harbour Tunnel. 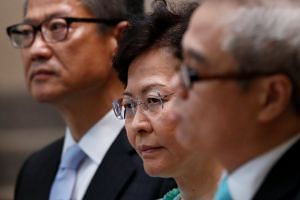 At the Hong Kong International Airport, a small crowd of less than 100 had swelled to some 1,000 people by midday.

The protesters had organised the sit-in to send out a message that Hong Kongers are being silenced and suppressed by the authorities.

Organisers had said the airport sit-in would continue into its third day today.

"We need to keep coming out to make our voices heard, because it's been so many weeks and still the government hasn't responded to us.

"At least the police are keeping calm so far," said engineer Isaac Leung, 30, who was at Tai Po.

The government, in a press statement late last night, said the demonstrators had damaged public property, and blocked major transport links, including the Cross Harbour Tunnel.

It also noted unlawful assemblies in Kowloon and the New Territories, which have caused public facilities to close early.

"We must stress that the protesters' actions are not only illegal, but also neglect public order and the needs of other residents. Violent acts such as arson are even dangerous. The government strongly condemns these acts," said the statement. Police will "rigorously enforce the law", it added.