BEIJING (BLOOMBERG) - Singapore Prime Minister Lee Hsien Loong's visit to China this week signals efforts on both sides to reaffirm relations that have showed strains over the past year - both in its timing and number of high-level meetings.

PM Lee began a three-day official visit on Tuesday, getting face time with China's top officials as they prepare for a once-every-five-years party congress next month.

"This is an extremely high-profile visit that happened at an extremely critical time," said associate professor Li Mingjiang, coordinator of the China programme at the S. Rajaratnam School of International Studies in Singapore's Nanyang Technological University.

"It shows the high-level connection between the two nations is stable and they highly regard each other in the relationship," he said.

Singapore expects to be at the forefront of the region's relations with China next year, when it heads the Association of South-east Asian Nations (Asean). 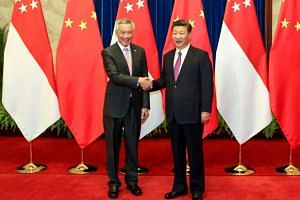 Singapore and China accounted for US$66 billion (S$89 billion) in two-way trade last year - representing 13 per cent of Singapore's total - and Mr Lee is eager not to miss out on Mr Xi's Belt and Road Initiative on global trade and infrastructure.

Said political science assistant professor Ja Ian Chong at the National University of Singapore: "The Lee administration and the current Beijing leadership have incentives to smooth over relations before Singapore rotates into the Asean chair next year.

China's Premier Li told his guest on Tuesday that China has always valued its ties with Singapore, a relationship built on mutual respect and equal treatment. Mr Lee said Singapore would promote stronger Asean-China cooperation during its chairmanship.

The visit comes at a sensitive time for Mr Xi, who is preparing for a party congress next month in which as many as five members of the Standing Committee could be replaced.

A key question is whether Mr Wang - the 69-year-old architect of Mr Xi's historic anti-corruption drive - will be among the older members who retire to make way for new blood.

Mr Lee is due to visit Fujian, a southern province where Mr Xi worked for more than 17 years, on Thursday.