Leaders pledge to work together on various fronts, hail progress in Chongqing project

Singapore and China have reaffirmed close ties and pledged to work together on various fronts, including advancing cooperation between Beijing and the Asean bloc amid tensions over the South China Sea territorial disputes.

In their meeting at the West Lake State Guesthouse yesterday, Prime Minister Lee Hsien Loong and Chinese President Xi Jinping took note of the close and longstanding friendship between both sides as set out in a partnership framework set up last November.

A Prime Minister's Office (PMO) statement said both leaders were also pleased with the "good progress" made on the Chongqing Connectivity Initiative (CCI), which is the third government-led project between the two countries and is based in the south-western city.

"Referring to the existing bilateral projects between the two countries as of 'strategic importance', they discussed the CCI's role as a key platform to operationalise China's 'One Belt, One Road' initiative," it added, referring to the ancient Silk Road revival efforts launched by Mr Xi in 2013 to boost China's links with the region. 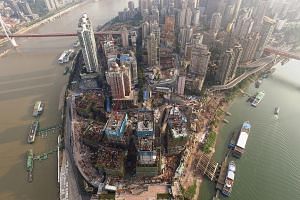 "PM Lee informed President Xi that Singapore would continue to perform its role as the Asean-China dialogue relations coordinator in an objective and transparent manner and work with Asean countries and China to promote closer cooperation between both sides," said the PMO statement.

In the meeting, Mr Xi called for mutual understanding and respect on issues related to the two countries' core interests and major concerns. "Xi expects Singapore, as the coordinator for China-Asean relations, to push forward the healthy and stable development of China- Asean ties," Xinhua news agency reported, quoting a statement on the Chinese Foreign Ministry website.

"China, Xi added, is ready to enhance communication and coordination with Singapore in regional and international mechanisms."

Mr Xi also said the two countries should maintain high-level exchanges and strengthen communication. Concerns over Singapore-Sino ties arose after recent remarks by China that appeared to be veiled criticism of the Republic's role as Asean-China relations coordinator, particularly over the South China Sea territorial disputes between China and four Asean nations.

Addressing those concerns in his National Day Rally speech last month, Mr Lee explained why Singapore - which does not take sides on specific claims of any country in the dispute - is "doing our best to be an honest broker" as country-coordinator, because it has "a lot at stake".

Mr Lee is on a four-day working visit to China that began yesterday and will include his first trip to Chongqing since the CCI's launch. He will take part in the Group of 20 leaders' summit as one of eight guest nations invited by China. The two- day summit in Hangzhou begins tomorrow and is the first to be hosted by China.