Two separate teams of US analysts examining satellite images from January and February have concluded that the North's reactor at Yongbyon, which had appeared to be dormant, is making plutonium - a principal fuel of nuclear arms.

In a report this week, one of the teams, at 38 North, a research institute at the Johns Hopkins University School of Advanced International Studies, said rising plumes of steam from the reactor complex, as well as melted river ice nearby, suggested "the reactor is operating again" to make plutonium for the North's nuclear weapons program.

The signs of nuclear activity coincided with the North's string of diplomatic overtures to South Korea and the United States.

The overtures began with Kim's conciliatory message toward the South in his New Year's Day address and intensified last month during the Olympic Games in Pyeongchang, South Korea.

The North's diplomacy accelerated this week, punctuated by Kim's meetings with South Korean envoys and the announcement that he and Trump - leaders known for their bombastic threats - would meet in May to discuss denuclearizing the Korean Peninsula. 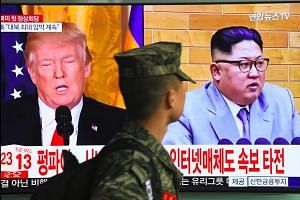 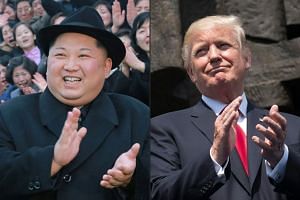 Nuclear experts say a core of irradiated fuel from the Yongbyon reactor can be processed to make between two and three nuclear weapons. The North began its nuclear program with plutonium and later expanded into uranium. Conservative estimates made in the past year or so put the North's overall atomic fuel production as sufficient to make between 20 and 25 weapons.

The 38 North team identified plumes of steam rising from the reactor in satellite images obtained Feb 17 and Feb 25 - the day the Olympics closing ceremony was held.

The other team, at the Institute for Science and International Security, a private group in Washington that tracks nuclear arms, came to similar conclusions about the North's nuclear activity. Three analysts studied satellite images taken Jan 17 and Jan 30 and discussed them in two reports, the first Feb 2 and the second Feb 13, as the Olympic Games were in full swing.

North Korea, the second analyst team said, "may be on the verge of expanding its stock of plutonium for nuclear weapons". All the images, evidence and analyses of the nuclear activity come as the North's programme for missile development has entered an unusual period of inactivity. The nation has fired no missiles this year, compared with 20 known launchings last year.

The North's most recent firing was more than three months ago. On Nov 29, it conducted a third test of an intercontinental ballistic missile, demonstrating a range that in theory could reach anywhere in North America, including Washington.