This comes after US President gets 'warm letter' from N. Korean leader seeking another meeting

The likelihood of another meeting between the two leaders to kick-start stalled talks on denuclearisation immediately drew support from several countries, including South Korea, China and Russia.

She also said the White House was "very open" to the idea of a second summit, and was "already in the process of coordinating".

Responding to the development, South Korean President Moon Jae-in voiced hopes for an "early resumption of sincere dialogue between the North and the US" to break the deadlock which has emerged since their leaders first met at a landmark summit in Singapore in June.

"Big plans and bold decisions by the two leaders are needed to advance nuclear talks and implement measures to remove North Korea's nuclear warheads," Mr Moon was quoted as saying in a weekly Cabinet meeting yesterday.

The South Korean leader, who is set to travel to Pyongyang next week for his third meeting with Mr Kim since April, added that he would continue to play the role of a mediator.

Separately, China said it was "pleased with positive interactions" between the US and North Korea.

Foreign Ministry spokesman Geng Shuang stressed, during a regular briefing, that China supported dialogue and negotiation between the two sides, and that the continuation of peaceful talks would "suit all concerned parties' interests".

China and Russia, in the meantime, have agreed to work together on the North Korean issue.

This was disclosed by Russian President Vladimir Putin after talks with his Chinese counterpart Xi Jinping in Vladivostok. Both men are in the Russian city to attend an economic forum.

Observers believe a second Trump-Kim summit would probably take place before the US mid-term elections in November. 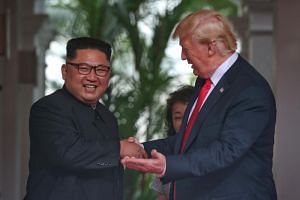 The director of unification strategy at the Sejong Institute in South Korea, Dr Lee Seong-hyon, told The Straits Times that Mr Trump would want the summit to benefit him in the mid-term polls.

"If Trump wants a dramatic media effect, there is no better place than Mar-a-Lago. Trump only invites 'friends' to Mar-a-Lago," said Dr Lee, referring to the President's Florida estate.

Dr Graham Ong-Webb, research fellow at the S. Rajaratnam School of International Studies, told The Straits Times that Mr Kim probably invited Mr Trump to Pyongyang - as he did in a June 1 letter to the US President.

"At this point, there is no further need for a neutral location. Someone has to initiate the reciprocal visits to each other's countries. Mr Kim cannot invite himself to Washington, but if Mr Trump counter-proposes with that location in mind, Mr Kim will not say no as it is an even bigger win for him."

"Mr Kim does not dislike working with Mr Trump and intends to continue negotiating with him," Dr Ong-Webb said.