The presence of PLA troops on the streets, even to help clean up roads near their base, could stoke further controversy over the Chinese-ruled territory's autonomous status.

The soldiers were seen assisting a group of bystanders as they cleared bricks and roadblocks set up by protesters near the Hong Kong Baptist University (HKBU), in a live stream shown by local broadcaster RTHK.

The soldiers - sporting green T-shirts and shorts, with some also wearing red basketball jerseys - were unarmed and worked with their bare hands as they cleared bricks on public roads outside the barracks, located opposite the university.

The live stream showed the soldiers communicating with each other in Mandarin. They were cheered on by onlookers, some of whom joined the clean-up.

Renfrew Road and Junction Road, located right next to HKBU and the barracks, have been blocked by debris left by protesters since Wednesday.

Hong Kong has been rocked by more than five months of demonstrations by protesters angry at perceived Communist Party meddling in the former British colony, which was guaranteed its freedoms when it returned to Chinese rule in 1997.

Beijing denies interfering and has blamed the unrest on foreign influences.

Clashes between protesters and police have become increasingly violent. China has warned that any attempt at independence for Hong Kong will be crushed, but troops have remained inside their base.

The PLA yesterday confirmed on its official Weibo account that soldiers from its Hong Kong garrison "helped residents to clear the roads and won applause from residents on the scene". 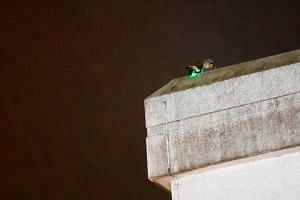 But the Hong Kong government made it clear that it did not seek help from the Chinese troops in the clean-up. "The Hong Kong garrison's assistance in the clearing of road blocks outside the Osborn Barracks in Kowloon Tong was purely a voluntary community activity initiated by themselves," said a government spokesman.

Chinese troops have been stationed in Hong Kong since the British handed the city back to China in 1997.

Chinese troops have appeared on local streets only once since the 1997 handover, to help with clean-up operations after a typhoon late last year.

"It may be a good PR exercise for the PLA, since some people welcome their assistance in clearing up the roadblocks," said Ms Emily Lau, former head of Hong Kong's Democratic Party.

"But others are disturbed and say it may be in breach of the Basic Law because they are not supposed to interfere in Hong Kong's affairs."

On Chinese social-media platform Weibo, a hashtag was trending on the topic, and posts related to it generated about 20 million views within hours.

Some held up posters reading "Police we stand with you", while others chanted "Support the police".