Analysts say this is a warning to protesters, who have become increasingly provocative

The People's Liberation Army (PLA) said yesterday that its forces stationed in Hong Kong can be deployed to maintain public order in the city - a move branded by analysts as a clear warning to protesters who are seen by Beijing as becoming increasingly provocative.

Such a move would have to come at the request of the Hong Kong government, according to its Garrison Law, which PLA spokesman Wu Qian referenced, noting that Article 14 has "clear stipulations". He did not elaborate further.

"We are closely following the developments in Hong Kong, especially the violent attack against the Central Government Liaison Office by radicals on July 21," Colonel Wu said at a briefing to introduce China's new defence White Paper.

"Some behaviour of the radical protesters is challenging the authority of the central government and the bottom line of one country, two systems, and that is absolutely intolerable. The Pearl of the Orient is not to be defiled."

Article 14 states that the city can ask the central government for help from the PLA's Hong Kong garrison to maintain public order and for disaster relief. Should Beijing approve, the garrison would send troops to carry out the specified tasks. They would then return to their station.

The troops would be under the command of the garrison's highest commander, or an officer authorised by the commander with arrangements made by the Hong Kong government.

The comments from China's Defence Ministry come amid what Beijing views as increasingly radical actions from protesters in Hong Kong, who oppose an extradition Bill that could allow criminal suspects to be sent to the mainland.

The territory has been convulsed by protests over the Bill for seven consecutive weeks. Protesters have clashed with police and stormed Hong Kong's Parliament, the Legislative Council (LegCo).

But it is their latest act of protest that has truly rattled Beijing and - according to one analyst who wanted to remain anonymous - come "close to their bottom line". 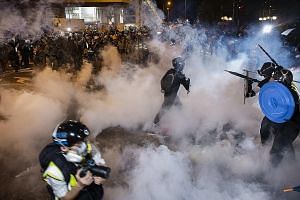 Beijing waiting for tide of public opinion to turn against protesters

Hong Kong, Taiwan and the hope for a better China

On Sunday, demonstrators besieged and vandalised Beijing's Liaison Office, defacing the national emblem. It sparked a chorus of condemnation from the mainland, including state media, the head of the Liaison Office and the Foreign Ministry.

Nanjing University professor and Chinese military expert Zhu Feng said: "On some degree, this has become a violent movement - the attacks on the Liaison Office and LegCo, most countries will not allow or accept this. (The comments from the ministry) are a warning to the protesters."

Professor Lau Siu Kai, vice-president of the Chinese Association of Hong Kong and Macau Studies, said that while Beijing is keeping the military option on the table, it is taking "a very cautious and disciplined approach to Hong Kong and depending on its police force to keep protests under control for now".

"The situation in Hong Kong has grown worse over the past few weeks, but has not spun out of control. As long as the Hong Kong police are able to maintain law and order, the PLA will not be activated in Hong Kong any time soon."

Beijing also had a stern warning for those seeking independence for Taiwan, calling it a "dead end". "If anyone dares to try to separate Taiwan from China, the Chinese army will certainly not hesitate to fight and resolutely defend the sovereign unity and territorial integrity of the country," said Col Wu.

A version of this article appeared in the print edition of The Straits Times on July 25, 2019, with the headline 'PLA says its forces in HK can be used to keep public order'. Subscribe
Topics:
More
Whatsapp Linkedin FB Messenger Telegram Reddit WeChat Pinterest Print Purchase Article Copy permalink