SEOUL (AFP) - North Korea will play in a table tennis competition in South Korea this month (July), in the latest sign of warming ties between the Cold War rivals whose rapprochement owes much to sport.

North Korea, who competed in February's Winter Olympics in the South, will send a team for the Korean Open south of Seoul from July 17-22, the International Table Tennis Federation (ITTF) said.

"It is a proud moment for the ITTF to be able to support another sign of peace on the Korean Peninsula, by helping North Korea send a team to the Korean Open," said the federation's president, Mr Tomas Weikert.

North Korea's participation in the Winter Olympics set the stage for a rapid improvement in relations with both Seoul and Washington, culminating in last month's summit between North Korea leader Kim Jong Un and US President Donald Trump in Singapore.

The two Koreas, who are still technically at war, bonded over table tennis as long ago as 1991, when they joined forces for the world championships in Japan and won the women's team event.

At the world team championships in May, North Korea and South Korea were due to face each other in the women's quarter-finals - but they were given permission to form a joint team instead, losing to Japan in the semi-finals.

"The momentous unified team at the 2018 World Table Tennis Championships...showed the world that countries can find peace on a table tennis table," Mr Weikert said in a statement. 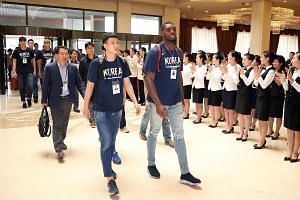 Only this week, about 50 men and women basketball players from South Korea played alongside North Koreans in combined teams in the North Korean capital Pyongyang.

The two sides are also discussing marching together at the opening ceremony of next month's Asian Games, where they will field joint teams in canoeing, rowing and women's basketball.