BAODING, CHINA (REUTERS) - When pigs on the Xinda Husbandry Co Ltd breeding farm in northern China began dying in growing numbers in early January, it looked increasingly likely that the farm had been struck by the much feared African swine fever, an incurable disease that has spread rapidly across the country since last year.

But after taking samples from some pigs, local officials in the Xushui district of Baoding city, about an hour's drive from Beijing, said their tests came back negative, said Mr Sun Dawu, the chairman of Hebei Dawu Agriculture Group, the farm owner.

As hundreds of pigs began dying daily on the 20,000-head farm, the company obtained a test kit that showed some positive results for the virus. But after further lobbying by Xinda, officials just offered the company subsidies for farm buildings and other investments, said Mr Sun.

Mr Sun's account of events and pictures taken by farm staff of dead pigs lying in rows and a pile outside the farm could not be independently verified.

Xushui district said in a faxed response to Reuters on Tuesday that it was opening an investigation into the case, adding that it had found some "discrepancies" with the reported version of events.

"If there is illegal behaviour, relevant departments will handle it according to the law," added the statement from the local government's investigative committee.

Farmers and other industry insiders told Reuters that China's African swine fever epidemic is far more extensive than official reports suggest, making the disease harder to contain, potentially causing pork shortages and increasing the likelihood that it will spread beyond China's borders.

"Our full expectation is that the number of cases is under-reported," said Mr Paul Sundberg, executive director at the Swine Health Information Centre in Ames, Iowa, which is funded by American pork producers.

"And if there's so much of that virus in the environment in China, then we are at increased risk of importing it."

China does not permit the commercial sale of African swine fever test kits, though many are now available. Official confirmation must come from a state-approved laboratory.

"Public confirmation of disease is the government's job," Mr Sun told Reuters at his company headquarters in Xushui in late February.

Frustrated by the lack of action and mounting losses from the disease, Mr Sun eventually published details of the suspected outbreak on China's Twitter-like platform Weibo on Feb 22.

Two days later, it became the first African swine fever case in Hebei province, one of the north's top pig-producing regions, to be reported by China's Ministry of Agriculture and Rural Affairs, about seven weeks after the company says it had alerted local authorities.

By then, more than 15,000 pigs on the Xinda farm had already died, said Mr Sun, and the company even sold on thousands of pigs - potentially spreading the disease further.

Mr Sun said officials did not explain why their first test had been negative, though he suggested it may have been because they took samples from live pigs on the farm and did not test the dead ones.

China's Ministry of Agriculture and Rural Affairs did not reply to a faxed request for comment on the case.

The Agriculture Ministry has warned against covering up outbreaks of the disease, and in January highlighted two large farms that had tried to conceal outbreaks. 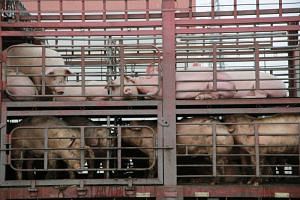 China has culled more than 900,000 pigs due to African swine fever

In one case in northern China last year, local officials declined to even carry out a test. In another case in Shandong province, official test results came back negative, despite clinical symptoms that strongly pointed to African swine fever and a positive test result obtained by the company itself.

Neither manager was willing to be named because of the sensitivity of the issue.

Once an outbreak of African swine fever (ASF) is confirmed, all pigs on the farm, as well as any within a 3km radius, must be culled and disposed of, according to Chinese law, and farmers should be paid 1,200 yuan (S$242.09) per pig culled.

For some cash-strapped county governments, avoiding compensation payments could be an incentive not to report disease, said a senior official with a major pig producer.

When the disease hit one of the company's 6,000-head sow farms in the north-east in November, local authorities did nothing, the official said.

"It was never tested by the government. We couldn't do the test because we didn't have the capability. But there's no question it was ASF, based on the symptoms and lesions," he told Reuters, declining to be identified because of company policy.

A county official in northeastern Liaoning province told Reuters in January that the local government had poured so much money and resources into preventing and controlling African swine fever that it risked bankrupting the county.

But wealthy Shandong province, northern China's biggest producer of hogs, has only confirmed one case of the disease, on Feb 20.

Insiders at one company said four of its farms in the province had suffered swine fever infections, however, suggesting more unconfirmed outbreaks may have occurred.

After the company's first outbreak in early January the local government tested and the results came back negative, said an executive, who declined to be identified because of the sensitivity of the issue.

Shandong province's animal husbandry bureau did not respond to a fax seeking comment on unreported cases.

There is no cure or vaccine for African swine fever and it kills about 90 per cent of infected pigs.

Analysts forecast pig production in China, which eats about half of the world's pork, will fall more than during the 2006 'blue ear' epidemic, one of the worst disease outbreaks in recent years, with some expecting a decline of around 30 per cent in 2019.

That would send meat prices soaring and trigger huge demand for imports.

The Agriculture Ministry said last week the pig herd in February had dropped 16.6 per cent year-on-year, and sow stocks were down more than 19 per cent.

China also has a patchy record of reporting disease. Details of the blue ear outbreak, which infected more than two million hogs, did not emerge until months after the damage had already been done, and the number of pigs that died is still disputed.

Like blue ear, African swine fever does not harm people. But it is classified a reportable disease by the Paris-based World Organisation for Animal Health (OIE), a global body that promotes transparency, and member country China is obliged to report each outbreak.

"You need to move faster than the virus, it's a very simple equation of how to control disease," said Dr Trevor Drew, director of the Australian Animal Health Laboratory at the national research agency, the Commonwealth Scientific and Industrial Research Organisation.

"If you don't know where the virus is, you can't stop it."

Since August 2018, Beijing has reported 112 outbreaks in 28 provinces and regions. The increase has slowed considerably in 2019 and the Agriculture Ministry said earlier this month the situation was "gradually improving".

But some suspect the disease is worse than the official data suggests.

"I am very much hoping that I am wrong, but if I consider the epidemiological characteristics of this virus disease, I would have to be extremely sceptical," said Dr Dirk Pfeiffer, a professor of veterinary epidemiology at the City University of Hong Kong.

He pointed to the "spatial randomness" of the reported outbreaks, unusual for an infectious disease, which normally develops in clusters.

The high rate of detection of the virus in food products carried from China to Japan, South Korea, Taiwan and Australia, as well as domestically, also indicated a much higher presence of the virus in Chinese pigs than reported, said Dr Pfeiffer and others.

With an extremely high density of pigs, raised largely on low-biosecurity farms, tackling disease is widely recognised as a major challenge for China.

But the disease has hit both small farms and large producers, say industry insiders, despite better hygiene and training at factory farms.

"The large producers have not been spared," said a manager with a company that supplies several of China's top pig producers. "Everyone is trying really hard on biosecurity, but they're still getting outbreaks, and they're frustrated and losing hope."

He said he knew of eight large breeding farms that had experienced outbreaks, including two on very large, 10,000-head sow farms. None were officially reported.

He declined to be named or to reveal the names of the producers because of client confidentiality.

Beijing has not officially reported any swine fever on the farms of large listed producers, whose shares are trading at record levels as investors bet the big producers will benefit from tighter supplies.

Mr Qin Yinglin, the chairman of China's No. 2 producer, Muyuan Foods Co Ltd, which raised 11 million pigs for slaughter last year, said most large companies were likely to be infected.

"If you checked carefully, testing one-by-one, then for sure everyone has it," he told Reuters in an interview. "This is a high probability event."

He said it was "not yet known" if his firm had been hit.