At a forum attended by some 700 Chinese and Philippine business people in the Great Hall of the People, the 71-year-old former mayor said America had "lost" after 70 years of alliance between the two countries.

In the presence of Chinese Vice-Premier Zhang Gaoli, he said: "I've realigned myself in your ideological flow and maybe I will also go to Russia to talk to (President Vladimir) Putin and tell him that there are three of us against the world - China, the Philippines and Russia. It's the only way."

I have separated from them. So I will be dependent on you for all time.

I've realigned myself in your ideological flow and maybe I will also go to Russia to talk to Putin and tell him that there are three of us against the world - China, the Philippines and Russia. It's the only way.

PHILIPPINE PRESIDENT RODRIGO DUTERTE, at a forum in Beijing yesterday that was attended by Chinese Vice-Premier Zhang Gaoli and some 700 Chinese and Philippine business people.

He then added: "I have separated from them. So I will be dependent on you for all time. But do not worry. We will also help as you help us." 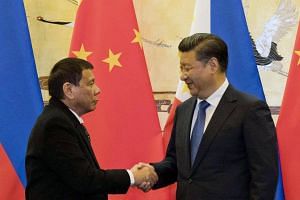 Duterte in China: Deals worth $19b clinched, 1m jobs to be created 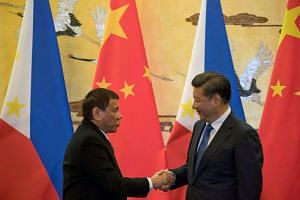 The US and the Philippines have been close allies but relations soured after Washington expressed concerns over Mr Duterte's bloody anti-crime war - criticism that Mr Duterte took offence with. Yesterday, a US official told Agence France-Presse that Manila had not made any formal requests to alter its cooperation with Washington.

The US has been looking to Manila as an important ally in Asia as China asserts itself as a dominant world power.

Beijing has rolled out the red carpet for Mr Duterte on his four-day visit with 400 business people in tow, signalling the first steps towards mending years of strained ties. Chinese President Xi Jinping extended a warm welcome to Mr Duterte yesterday, complete with full military honours in a ceremony at the Great Hall - a rarity for visiting leaders.

In their meeting, Mr Xi said people from both countries are "brothers related by blood", and they could "appropriately handle disputes".

He added that both countries have largely managed their differences on the South China Sea issue through dialogue and consultation, since the establishment of diplomatic relations 41 years ago in 1975.

"Under this premise... China and the Philippines can have candid exchanges on everything, manage differences well, carry out cooperation and temporarily put aside problems that are difficult to agree on," said Mr Xi.

Mr Duterte, on his part, highlighted that warm relations between both sides go back a long way.

"China has been a friend of the Philippines and the roots of our bonds are very deep and not easily severed," he told Mr Xi.

"Even as we arrive in Beijing, close to winter, this is a springtime of our relationship," he added.

No details were given on when talks on the maritime disputes will resume, and what items will be tackled first. But Chinese Vice-Foreign Minister Liu Zhenmin told reporters "both sides will go back to what was agreed five years ago, to seek a proper settlement of the South China Sea issues through bilateral dialogue".

Yesterday, both countries signed a pact to set up a joint coast guard committee on maritime cooperation. But one glaring omission from the meetings was the mention of Filipino fishermen's fishing rights in the waters of the disputed Scarborough Shoal, which led to bilateral relations plunging to a low in 2012.

Mr Duterte had, on more than one occasion, said that he would raise the issue with Mr Xi. Chinese media and insiders had also hinted that Beijing may open up the area to Filipino fishermen in a gesture of goodwill.

Instead, both sides discussed fishery cooperation, which will include China's aid to Filipino fishermen in areas such as aquaculture and the commercial processing of fish.

Mr Duterte is scheduled to fly back to his home base of Davao this afternoon after a series of meetings with Chinese businessmen.

A version of this article appeared in the print edition of The Straits Times on October 21, 2016, with the headline 'Duterte declares 'separation' from US, leans towards China'. Subscribe
Topics:
More
Whatsapp Linkedin FB Messenger Telegram Reddit WeChat Pinterest Print Purchase Article Copy permalink