MANILA - The Philippines is not breaking its economic and trade ties with the United States, the country's economic ministers said on Friday (Oct 21), walking back a declaration made just a day earlier by President Rodrigo Duterte.

The ministers were seeking to allay uncertainty after Mr Duterte, at a forum in Beijing on Thursday attended by Chinese Vice-Premier Zhang Gaoli, declared:  “In this venue, I announce my separation from the United States… Both in military, not maybe social, but economics also. America has lost.”

Trade Minister Ramon Lopez told CNN Philippines in Beijing that Mr Duterte “did not talk about separation".  "In terms of economic ties, we are not stopping trade, investment with America,” he said.

Mr Lopez clarified that the Philippines was just “breaking being too much dependent on one side".  “But we definitely won’t stop the trade and investment activities with the West, specifically the US," he added.

Budget Minister Benjamin Diokno also said on Friday that the Philippines' warming ties with China does not mean its relationships with other countries are cooling down.

Economic Planning Minister Ernesto Pernia and Foreign Minister Carlos Domingue, in a joint statement issued on Thursday evening, said: “We will maintain relations with the West, but we desire stronger integration with our neighbours.”

They said Mr Duterte was in fact seeking to “move strongly and swiftly towards regional economic rebalancing for closer integration in Asia”. 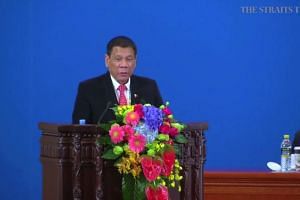 Philippines' Rodrigo Duterte declares 'separation' from US, leans towards China

In his speech, the brash and often ill-tempered Philippine leader told the Chinese audience that he had “realigned (himself) in your ideological flow”.

"Maybe I will also go to Russia to talk to (President Vladimir) Putin and tell him that there are three of us against the world – China, Philippines and Russia,” he said. “It’s the only way.”

The assistant minister at the presidential communications office Maria Banaag told reporters on Friday: "We have to wait for guidelines. There's no rush to interpret the President's speech...  We don't have to worry or react to whatever the President said, especially businessmen. There's nothing yet on paper".

The United States meantime said that it is committed to its alliance with the Philippines.

“We have important alliance commitments which we intend to keep in the Philippines,''  reports quoted Defence Secretary Ash Carter as saying before arriving in Ankara, Turkey. “Obviously any relationship is one of mutuality and we will continue to discuss that with our Philippine counterparts.”

The United States is the Philippines’ third-largest trading partner, with US$16.5 billion (S$23 billion) in trade.  Japan is top trading partner with US$18.7 billion, and China second with US$17.6 billion.

There are about 3.4 million Filipinos in the US, remitting nearly US$10 billion a year to the Philippines.  They make up the largest population of Filipino migrants. Some 1.2 million Filipinos work for American outsourcing companies.

Mr Duterte’s efforts to engage China, months after a tribunal at The Hague ruled that Beijing did not have historic rights to the South China Sea in a case brought by the previous administration, marks a reversal in foreign policy since the 71-year-old former mayor took office on June 30.

His anti-American insults and broadsides stem from US criticism of his human rights record. US President Barack Obama had expressed concern over the thousands of extrajudicial killings that had marred Mr Duterte’s anti-crime drive. In his response, Mr Duterte told Mr Obama to “go to hell”.

He had said he was turning to China and Russia, which he believed had shown him respect by not criticising his war on narcotics, which he described as a “pandemic”.