Once adored as Daughter of the Nation, South Korean leader's popularity now as low as 4%

Ms Park Geun Hye was the Daughter of the Nation, adored by a generation of South Koreans nostalgic for the era when her father ruled the nation for nearly 20 years. But last Friday, the country disowned her.

Mired in deep scandal and faced with an angry million-strong mob demanding her resignation, the President's remarkably swift fall from glory hit rock bottom last Friday when Parliament impeached her and stripped her of all powers.

The widespread derision that greets her now could not be more incompatible with the splendour of her win as the Saenuri Party candidate just four years ago, when she beat her Democratic Party opponent to the presidency.

When she was elected as South Korea's first female president then, her approval rating was 51.6 per cent. Polls now show her popularity has sunk to as low as 4 per cent, the worst for any South Korean president in modern history.

Yet, with her blue-blooded pedigree, some thought she could never do any wrong.

She has achieved nothing. The economy has deteriorated. Our culture is not thriving as it used to. Civic liberties and press freedoms have declined as she cracked down on dissent.

Ms Park, 64, spent her childhood in the Blue House, the presidential residence in Seoul. Her father Park Chung Hee had seized power through a military coup in 1961.

Despite being a military strongman, he has been credited for turning South Korea into an export-focused tiger economy, overtaking North Korea, which was then the stronger economic power.

Ms Park studied electronic engineering at Sogang University and later went to the University of Grenoble to study French.

Her Western sojourn was abruptly interrupted when her mother was assassinated in Seoul by a North Korean sympathiser in 1974.

Being the eldest child, she became the country's First Lady at the age of 22, a role that would endear her to voters when she eventually ran for presidency. Five years later, her father was assassinated by his own security chief in the Blue House.

Ms Park retreated from the public eye after that, only to be persuaded by conservative party members to join politics 20 years later.

In 1998, she was elected into the National Assembly on the promise of revitalising the South Korean economy after the 1997 financial crisis. When she won the presidential election in 2012, the country looked to her to create more jobs, pull the economy up and keep North Korea at bay. 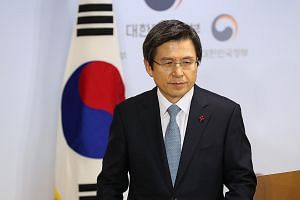 Acting president seen as a Park loyalist and key defender

But in her four years at the helm, she was better known for her aloofness, her high-handedness in dealing with dissent ­- much like her father - and her inability to keep her rogue neighbour in check.

"She was able to become president because she effectively built the image of a trustworthy politician, who abides by principles and keeps promises. In hindsight, it is amazing how she could have done this," professor of politics Lee Joon Han of Incheon National University told the Financial Times.

"She has achieved nothing. The economy has deteriorated. Our culture is not thriving as it used to. Civic liberties and press freedoms have declined as she cracked down on dissent," he added.

So, when details of her uncomfortably close ties with a controversial cult leader's daughter emerged in October, simmering anger at Ms Park's perceived ineffectual leadership bubbled over.

South Koreans were livid that their president had given her friend Choi Soon Sil access to confidential government documents and allowed her to make policy decisions. The dependence extended to Ms Park's sartorial choices, which were made by Ms Choi.

The two women's aides were also found to have used their influence to extort millions from business conglomerates, or chaebols, to set up two sports and culture foundations under Ms Choi. They later claimed they were acting on Ms Park's orders.

Record numbers turned up at mass rallies around the country for six weeks, pushing for Ms Park's resignation and Ms Choi's indictment.

In her second public apology last month, Ms Park, who never married, appealed for sympathy, saying she has been "living a lonely life" while estranged from her family.

"Living by myself, I had no one around me who could look after my personal affairs. So I resorted to Choi, who has been my long-time friend," she said solemnly, head bowed. "Looking back, I realise that over-depending on Choi has blinded my sense of objectivity and made me negligent with my surroundings. I can't even forgive myself, and the grief keeps me up at night."

"She has been very careful in her presidency to avoid any sign of impropriety in her own actions, but she ultimately was vulnerable to the human need for friendship and a confidante and didn't draw a clear line between personal needs and public responsibilities," said Dr Moon.

"I think the public and media accusations that Park was a 'puppet' of Choi is off the mark. Park has been a savvy political operator since her emergence on the political scene in the late 1990s."

Indeed, she survived a knife attack while on a campaign trail in 2006 and overcame pervasive gender inequality to rise to the top in a first for the country.

But her fate is now in the hands of nine Constitutional Court judges who will rule, within 180 days, if Parliament's impeachment vote should go through.

•Additional reporting by Chang May Choon