S. Korean leader makes concession to defuse anger, will have to withdraw her PM nominee

South Korean President Park Geun Hye said she will cede control over state affairs to a new prime minister to be appointed by the opposition-dominated Parliament, as she fights for political survival amid an influence-peddling scandal.

She met Speaker of Parliament Chung Sye Kyun yesterday and made the concession, which means she would have to withdraw her earlier nomination of university don Kim Byong Joon as prime minister.

If Parliament can nominate a new prime minister, she will let him "control the Cabinet", she said.

It is not clear if she will keep control over diplomacy and national security as her Saenuri party suggested, or give up all power and be a symbolic head of state as the opposition demanded. 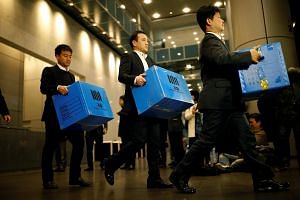 But the concession could reduce Ms Park to a figurehead in the 15 months left of her five-year term.

Calls have grown for Ms Park to step down after she was embroiled in a scandal involving her confidante, Ms Choi Soon Sil, who allegedly meddled in state affairs despite not holding any public office.

Ms Park's approval ratings had plunged to as low as 5 per cent in a Gallup Korea poll last week, with thousands of people joining a protest in Seoul over the weekend to demand that she resign.

Yesterday, she walked past lawmakers holding signs saying "step down" as she went to the National Assembly to meet Mr Chung of the opposition Democratic Party. She said "it was my great responsibility to normalise state affairs".

Analysts said she does not intend to step down, but might leave her party to minimise damage to it.

Political scientist Balbina Hwang, a visiting professor at the Washington-based Georgetown University, said it would be a "mistake" for Ms Park to resign, as it could weaken the country's democratic system and set a bad precedent.

"If South Korea is to truly be a mature and developed democracy, then its elected leaders cannot be held hostage to emotional outbursts and public anger," she said.

Dr Lee Myon Woo of think-tank Sejong Institute said a resignation could create a power vacuum that would throw the country into political turmoil and affect its economy.

There has been talk of impeachment, but this is unlikely for now. There is no proof yet that Ms Park had engaged in corruption or criminal activities, even as prosecutors widen their probe into Ms Choi.

Analysts say the best option is for Ms Park to pull herself out of domestic affairs, ensure a smooth handover to the new prime minister, and focus on foreign policy.

Sogang University's international relations professor Kim Jae Chun said Ms Park should still take care of big issues like the deployment of the US Terminal High Altitude Area Defence anti-missile system and intelligence-sharing deal with Japan. "Park should still take the lead in foreign policy because she is still the President," he said.

Public anger may subside. Local pollster Realmeter said Ms Park's daily approval ratings stopped plunging after she apologised and expressed willingness to be investigated. This went from a low of 10.2 per cent last Wednesday to 12.7 per cent last Friday.

"Park Geun Hye is in a very difficult position, but I do not necessarily think her leadership is doomed," said Prof Hwang.

"This could be an opportunity for her to change some of her attitudes that have been criticised by the public, and to embrace opportunities for significant change."