BEIJING (China Daily/Asia News Network) - For the parents of Nie Shubin, China's most famous case of a miscarriage of justice, the only thing that has kept them alive for the past 20 years is their relentless drive to clear their son's name.

That fight began in 1994, when their son was arrested for rape and murder of a woman whose body was discovered by her father in a corn field on the outskirts of Shijiazhuang city, in the northern province of Hebei.

Despite the fact that the time, method and motive for the murder could not be confirmed, and key documents related to witnesses and the defendant's testimony were missing, Nie was convicted of murder and executed by a firing squad on April 27, 1995.

He was only 21. His parents were not informed of his execution and did not see him for the last time before he died.

"My husband and I often say to ourselves we have to strive to live until the day my son's name is cleared," said his mother, Madam Zhang Huanzhi, in an interview with Xinhua news agency in 2014. 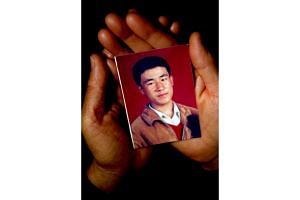 "I have so much regret because I did not even get to see my son before he was killed," Mdm Zhang, 72, said. "The only thing I could do was to try to prove his innocence to ease my pain."

She finally got her wish on Friday (Dec 2). China's top court, the Supreme People's Court, exonerated Nie Shubin followed a second re-examination of the case that began in June.

"The facts are unclear, the evidence is insufficient", it said according to Xinhua.

Videos of Nie's family bursting into tears at the news of the verdict were shared thousands of times on the microblog Weibo, China's equivalent of social network Twitter.

Mdm Zhang looked calm during the announcement. But she suddenly burst into tears and started to knock on a table in front of her when the court read the word "innocent".

Mr Li Shuting, the family's lawyer, patted her on the back, as his own tears flowed behind his glasses.

"I have been expecting today for a long time, but my son won't come back again," Mdm Zhang said.

She said she would go to her son's grave to comfort him upon her return to the family home in Luquan county in Hebei province.

Her husband, Mr Nie Xuesheng, said it was the happiest day in more than 20 years since his son was executed.

Mr Nie attempted suicide the day after he learned of his son's execution from a staff member of the prison grocery shop on April 28, 1995.

He had gone to the prison to visit his son and give him a shirt.

The suicide attempt left him paralysed in one of his legs, so his wife made most of the trips to the court asking for a retrial.

The father told Beijing News that he accepted the apology from the Provincial High People's Court in Hebei on Friday.

The confession in 2005 of another man, Wang Shujin, to the rape-murder gave Nie's parents power and courage to continue.

In March 2005, Mdm Zhang hired a lawyer and began the legal process to clear the name of her son. Soon after the appeal, the provincial Political and Legal Affairs Committee in Hebei said it would set up a joint investigative group with other judicial departments in the province to look into the case.

However in the decade since, no positive decisions were made in Nie's case.

It was not until December 2014, when the Supreme People's Court, the country's top court, ordered a retrial of Nie's case in Shandong High People's Court that the family found hope in their excruciating struggle for justice.

Mdm Zhang said she was relieved when the top court designated the court in Shandong to review her son's case.

She had visited the Hebei High People's Court multiple times since 2005 requesting that her son's case be reviewed, but always in vain.

"I'm more than thrilled," Zhang said in an interview with Xinhua News Agency in 2014. "The decision is a reflection that the country's judicial system is improving."