TOKYO (AFP) - A panel weighing 3kg fell from a plane onto a factory near Tokyo, Japanese officials said on Thursday (Sept 28), the country's second case in a week after a similar part landed on a car.

No injuries were reported after the panel was discovered inside the factory near Narita Airport in the suburbs of the Japanese capital, a spokesman for All Nippon Airways told AFP.

"After consulting with a panel manufacturer, we identified that the panel was one that fell from our plane," a Boeing 767 flying from the south-eastern Chinese city of Amoi, said the spokesman, Hiroyuki Miyagawa.

The panel was used as a cover for the emergency slide and ANA said a faulty bottle containing nitrogen gas was to blame.

The nitrogen is used to blow the panel off the plane, allowing the slide to deploy in an emergency but the bottle leaked, the spokesman said, adding it had since been replaced and apologising.

Last weekend, a panel fell from a KLM Royal Dutch Airlines Boeing 777 shortly after take-off from Osaka airport, smashing the window of a car being driven below. 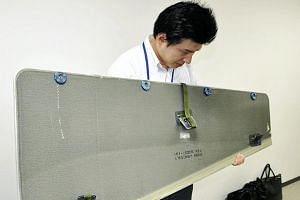 Japan mulls over compensation plan for objects falling from airplanes