Two Singapore firms have inked a deal with a Chinese business association to help Chinese companies wanting to expand to Singapore and beyond.

The memorandum of understanding (MOU) between United Overseas Bank (UOB), the Singapore Exchange (SGX) and the China Chamber of International Commerce (CCOIC) was signed in Beijing last Saturday.

The deal was one of the agreements reached between representatives from Singapore and their Chinese partners in conjunction with the Belt and Road Forum, which ended last Saturday in Beijing.

Under the MOU, more than 180,000 Chinese enterprises under the CCOIC will be able to tap UOB's banking expertise and networks, and SGX's capital market infrastructure to not only expand to Singapore but also use it as a launch pad into the rest of South-east Asia.

At a press briefing yesterday, the head of UOB's foreign direct investment (FDI) advisory, Mr Sam Cheong, noted that an increasing number of Chinese firms were choosing Singapore as their regional headquarters.

He said the bank helped more than 100 Chinese firms internationalise last year, about 50 per cent more than the year before. 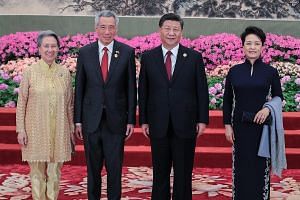 "Singapore has very strong bilateral (trade and tax) agreements with many countries, we are a financial and arbitrage centre, and, if you use Singapore as a platform, you can engage international markets a lot more efficiently," he added.

The bank has nine FDI centres across Asia that, among other things, link customers up with service providers such as accountants, legal advisers and government officials, and help them understand local regulations and practices, Mr Cheong said.

Such initiatives to help Chinese companies launch investments into third-party countries have been one area of cooperation that the Singapore Government has been promoting with China.

Beijing has been keen to stress that the Belt and Road Initiative, which aims to create trade links from China across Asia, Africa and Europe, is a multilateral and inclusive initiative.

SGX's head of equities and fixed income Chew Sutat also said Singapore is a big energy, commodities and foreign exchange trading hub, and that CCOIC's members are in the trade or traditional sectors.

"When these companies set up in Singapore, they need a banker, and they also use a lot of services that SGX provides," said Mr Chew.