BEIJING - China will deepen its targeted poverty alleviation efforts this year, as the clock ticks down on a crucial political promise to lift all Chinese out of poverty by 2020.

Premier Li Keqiang said China aims to further reduce its poor rural population by more than 10 million in 2018, including relocating 2.8 million out of inhospitable areas.

Much of the efforts will be focused on regions with significant minority populations that have struggled with poverty for decades, such as Tibet, Xinjiang, as well as parts of Yunnan and Gansu provinces.

The drive to completely eradicate poverty by 2020, a key tenet of turning China into a moderately prosperous society, is a formidable challenge as the remaining poor are the hardest to raise up, said Mr Li.

"Poverty alleviation remains a formidable task; agriculture is not based on a strong foundation," he said in his work report at the opening session of China's annual Parliament meetings.

"The disparities in development between rural and urban areas, between regions, and in income distribution remain substantial."

China has significantly ramped up spending on its poverty reduction drive in recent years. Beijing allocated 86.1 billion yuan (S$17.9 billion) towards poverty reduction efforts in 2017, a 30 per cent increase over the figure in 2016. 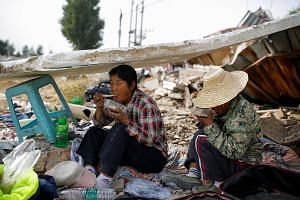 China's war on poverty could hurt the poor most 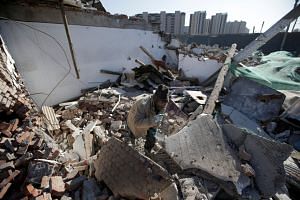 Eliminating extreme poverty in China by 2020 is a key promise that President Xi Jinping made in 2015. He made the ambitious task of lifting the remaining 70 million Chinese living under the official poverty line a policy priority at a poverty reduction forum in Beijing that year.

While the country has succeeded in lifting more than 13 million people out of poverty every year since, some 30 million Chinese still live under the official poverty line of 2,300 yuan a year.

The large sums being directed towards poverty reduction have attracted corruption, admitted Mr Li, who said that Beijing will tighten oversight over the use of public monies to ensure proper use.

More than 49 billion yuan in public funds were found to have been misused last year, according to China's latest budget report.

"Poverty alleviation funds will be better integrated and performance-based management will be strengthened," Mr Li said.

"We will take targeted measures against corruption and misconduct in poverty alleviation, and improve the methods used in evaluation and oversight," he added.