BEIJING - With her husband incapacitated by a stroke and son left bedridden by a birth defect, the diminutive woman from a remote village of Xiaomiaozi in Inner Mongolia had resigned herself to a life of hardship.

"She told me, 'my body is like this, my family situation is like this, there's nothing I can do'," recounted the village's party secretary Zhao Huijie.

The monthly subsistence allowance from the government and temporary assistance from local authorities were barely enough to keep them afloat, said Ms Zhao.

As China marches towards its 2020 goal of eliminating abject poverty, these are the knotty and intractable situations that it has to solve, officials said on Thursday (March 15).

Part of ensuring long-term success in eradicating poverty is to inculcate greater responsibility and drive in those who are being helped, Ms Zhao added.

Following repeated visits from local officials who told the villager about government loan and start-up schemes she could tap, she opted to raise livestock. After helping her identify small-scale pig farming, officials also helped her to apply for a loan and build a shed for the animals. Experts were called in to give her technical guidance.

"Last year, she expanded to raising geese and selling their eggs, and successfully exited poverty," said Ms Zhao. "That is our goal: to help the poor live dignified and happy lives." 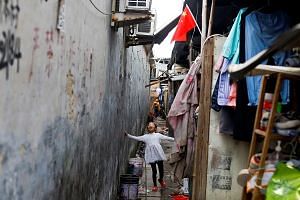 Three principles in war on poverty

Eradicating extreme poverty by 2020 is a key promise President Xi Jinping has made, and is a core component of China becoming a moderately prosperous society.

The past five years saw China lift about 66 million people out of extreme poverty. But some 30 million still live under its official poverty line of 2,300 yuan (S$478) a year.

Party secretary of Jinyun village in Sichuan province, Mr Li Jun, noted one of the challenges is how to help the poor overcome their fear of change and failure.

For instance, some of them in his village had little motivation to raise crops or rear livestock as poor infrastructure meant there was no way to get their produce to consumers.

But Beijing's extensive policies to improve rural infrastructure and quality of life have made it easier for local officials to motivate the people to work hard.

"Once someone has tasted the sweetness of making their own money and living in dignity, their doubts will disappear and they will strive to do even better," he said.