BEIJING • If China's economy is weakening, someone forgot to tell Ms Jasmine Wang.

"My parents haven't asked me to cut back on my spending," said Ms Wang, a 22-year-old graduate student in Beijing who collects limited-edition fragrances from brands such as Chanel and Guerlain that can cost up to US$300 (S$406) each. She said her parents are paying her monthly bills of about 6,000 to 8,000 yuan (S$1,200 to S$1,600) and will keep supporting her if she struggles to find a job.

Ms Wang is just one member of China's Generation Z trying to find her way in a country of 1.4 billion, but her story gets to the conundrum facing investors trying to assess the world's second-largest economy.

While Apple, Caterpillar, Volkswagen and other companies are sending tremors through Wall Street with warnings about softness in China, others are sounding more bullish, including fashion brands that might appeal to affluent consumers like Ms Wang.

"We are not seeing a slowdown," said Mr Patrice Louvet, chief executive of Ralph Lauren. The company reported revenue in China growing by 19 per cent last quarter.

The two camps have come into stark relief in recent weeks. China's rapid economic growth of years past is slowing, and the trade war with the US has unsettled businesses.

Dozens of multinationals have sounded the alarm about weakening demand and, in cases like Caterpillar, reported unexpected declines in sales in the fourth quarter. Hundreds of Chinese companies also have issued profit warnings.

But in addition to Ralph Lauren, Paris-based luxury giant LVMH and UK distiller Diageo are upbeat about business in the Asian nation.

Earnings reports this week from L'Oreal, Pernod Ricard and Capri Holdings - the owner of the Jimmy Choo and Versace labels - may also provide further insight.

China has always been a difficult economy to read. The government produces less data than other major nations and uses public assistance that can make it hard to assess the real health of demand.

"If you're a young Beijing person, and your parents have raised you as an only child, you might not feel the effects," said associate professor of economics Sara Hsu at the State University of New York at New Paltz, who specialises in the Chinese economy. "But that certainly doesn't cover a lot of people."

China has always been a difficult economy to read. The government produces less data than other major nations and uses public assistance that can make it hard to assess the real health of demand.

The list goes on: Many are run-of-the-mill goods, the first links in the supply chain. 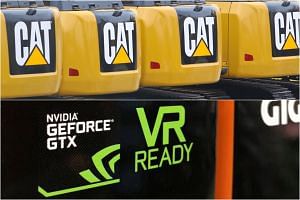 China weakness spreads far and wide, from Caterpillar to Nvidia

Across 195 fourth-quarter earnings calls analysed by Bloomberg Intelligence, 100 companies cited a slowdown in China, according to a Feb 4 report.

"The irrational exuberance they used to have, that China was a slam dunk and such an untapped opportunity, has now been pretty tempered," said Mr Steve Pasierb, president of the Toy Association, a trade group for manufacturers.

"Yes, the population growth is still happening there and growth in the middle class, but things have slowed." Many of the companies that have bucked the gloomy trend are consumer businesses.

Rich Chinese are still splurging on Louis Vuitton handbags and Hennessy Cognac. There is even evidence that rural shoppers are buying more expensive liquor.

But if history is any guide, the wealthy are often the last to feel an economic downturn.

Mr Alex Du from Beijing, a retail worker in his 30s, said he does not have a lot of savings, and could not afford a car. "Pretty much spend every penny I make," Mr Du said.

A version of this article appeared in the print edition of The Straits Times on February 07, 2019, with the headline 'Not all sectors hit by China's economic slowdown'. Subscribe
Topics:
More
Whatsapp Linkedin FB Messenger Telegram Reddit WeChat Pinterest Print Purchase Article Copy permalink