Here's a timeline of the missile launches and tests the regime is known to have carried out this year:

Feb 12, 2017: North Korea fires its first ballistic missile in 2017, in what is seen as a show of force against the leaders of the United States and Japan reaffirming their security alliance. The missile is believed to be a mid-range Rodong or something similar, flying 500km and landing in the East Sea, also known as Sea of Japan.

April 29, 2017: In an apparent defiance of a concerted US push for tougher international sanctions to curb Pyongyang's nuclear weapons ambitions, the country test-fires a ballistic missile from the Pukchang region in a north-easterly direction. The missile reaches an altitude of 71 km before disintegrating a few minutes into flight. 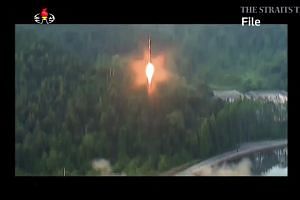 May 14, 2017: Only four days after the inauguration of South Korea's new leader Moon Jae In, North Korea fires a ballistic missile in an apparent bid to test the liberal president and the US, which have both signalled an interest in negotiations to ease months of tensions.

The missile flies for 700km and reaches an altitude of more than 2,000km before landing in the Sea of Japan or East Sea, further and higher than an intermediate-range missile North Korea successfully tested in February from the same region of Kusong, north-west of Pyongyang. The North boasts that the launch is aimed at verifying the capability to carry a "large scale heavy nuclear warhead".

The test sparks a fresh chorus of international condemnation and threats of tougher United Nations sanctions.

North Korea is likely showing its determination to push ahead in the face of international pressure to rein in its missile programme and "to pressure the (South Korean) government to change its policy on the North", South Korea's Joint Chiefs of Staff spokesman Roh Jae Cheon said.

June 8, 2017: A volley of surface-to-ship cruise missiles are fired off North Korea's east coast, less than a week after the United Nations expanded sanctions against Kim Jong Un's regime in response to recent ballistic missile tests.

The short range missiles fly some 200km before falling into the Sea of Japan, says South Korea's defence ministry.

June 22, 2017: North Korea conducts a "small rocket engine test on or around June 22, the respected 38 North analysis group says, after a US official reportedly suggested the test could be a step to develop an intercontinental ballistic missile (ICBM).

It is not clear whether the test, conducted at the North's Sohae satellite launch site, involved an ICBM engine.

July 4, 2017: Just days after South Korea President Moon Jae In and US President Donald Trump focused on the threat from Pyongyang in their first summit, North Korea fires a ballistic which flies for 930km and exceeds 2,500km in altitude in 40 minutes before falling into Japan's exclusive economic zone, Seoul and Tokyo say.

The US military says the missile is an intermediate range ballistic missile and does not pose a threat to North America, but analysts say the  Hwasong-14 missile is able to reach Alaska.

July 28, 2017:  In an unusual late-night launch, North Korea conducts its second test of  the Hwasong-14 ICBM. It flies a longer distance than the July 4 missile and experts say it can strike Los Angeles and other US cities if fired at a normal trajectory.

Aug 26, 2017: North Korea fires three short-range missiles into the sea off its east coast early morning. One appeared to have blown up alomost immediately while two failed in flight.

Aug 29, 2017: North Korea fires a ballistic missile over Japan on Tuesday shortly before 6am local time. It is fired  eastward from the vicinity of Sunan in Pyongyang at around 5:57 am, passed over Japan and fell into the Pacific Ocean at around 6.12am. Japan's Prime Minister Shinzo Abe denounced the move as an "unprecedented, serious and grave threat", and urged the United Nations to strengthen pressure on Pyongyang.

Sept 15, 2017: North Korea fired a missile on Friday that flew over Japan’s northern Hokkaido far out into the Pacific Ocean, South Korean and Japanese officials said, further ratcheting up tensions after Pyongyang’s recent test of  its sixth and most powerful nuclear bomb on Sept 3.