SEOUL (REUTERS) - North Korea will transfer the remains of an unspecified number of soldiers killed in the Korean War on Friday (July 27), South Korea's Yonhap news agency reported, after accepting about 100 wooden caskets sent by the United States.

The repatriation of the remains of US soldiers killed in the 1950-53 Korean War was one of the agreements reached during a landmark summit between US President Donald Trump and North Korean leader Kim Jong Un in Singapore on June 12.

US Forces Korea said later last month they had moved 100 wooden temporary transit cases into the demilitarised zone separating the two Koreas to receive and transport the remains.

Yonhap, citing an unidentified diplomatic source, said on Thursday that North Korea had accepted the caskets, which were carried in two trucks, and was expected to transfer the remains on Friday.

The planned transfer would coincide with the 65th anniversary of the 1953 armistice agreement that ended fighting.

A US military transport plane was set to fly to an airfield in North Korea's northeastern city of Wonsan to accept the remains, Yonhap reported. They would then be flown to Hawaii after an initial DNA analysis at Osan air base in South Korea.

CNN, citing a US official, reported earlier this week that Washington expects to receive an initial 55 sets of remains and planned to send officials to North Korea to open and photograph each casket as part of a "cursory review" of what the North Koreans turned over. 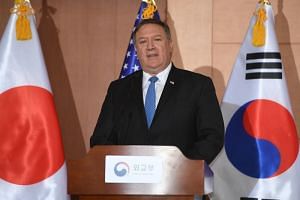 US forensic specialists in Osan would then conduct a more in-depth assessment of the remains and any military uniforms, identification tags or documentation, a process that could take up to five days, followed by a formal military ceremony at the airfield.

The remains would then be flown to a US military laboratory in Hawaii for DNA analysis, CNN reported.

South Korea President Moon Jae-in said during a meeting with new US Ambassador Harry Harris on Wednesday that a transfer of the remains would boost the momentum for nuclear talks between Pyongyang and Washington.

Mr Kim and Mr Trump agreed to work towards denuclearisation at their Singapore summit, but there has been no sign of a concrete agreement on how to achieve that goal.

Admiral Harris said the transfer, as well as the North's perceived closing of a missile engine testing site, would be an "important sign" to show Mr Kim's sincerity about denuclearisation, Mr Moon's office said.

Recent reports that North Korea had started dismantling a rocket test site are consistent with a commitment made by Kim at the summit, but it must go further and fully denuclearise, US Secretary of State Mike Pompeo said on Tuesday.