SEOUL (AFP) - Pyongyang will suspend Chinese tour group visits to North Korea ahead of a high profile anniversary next month, according to news reports on Saturday (Aug 11).

The North's Korea International Youth Travel Agency told a Chinese tourist agency that hotels in Pyongyang would be closed for renovations for 20 days starting Saturday, according to South Korean media reports.

Another North Korean travel agency informed their Chinese partner that an unspecified "state decision" meant they had to stop receiving Chinese tour group package travellers until September 5, the reports said.

North Korea has in the past restricted entry to foreigner tourists as the country prepares for significant events, giving a variety of reasons for the moves, Yonhap reported.

The latest measure comes as the North prepares to mark the 70th anniversary of the foundation of the government.

In his New Year speech in January, leader Kim Jong Un said North Korean people would "greet the 70th founding anniversary of their Republic as a great, auspicious event".

The North has been preparing for the arrival of foreign delegations and thousands of North Korean citizens have reportedly been practising choreographed movements in Pyongyang for the official celebration of the anniversary. 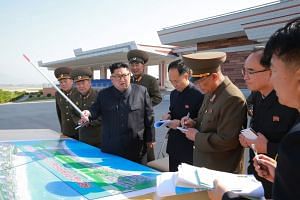 In part thanks to a recent diplomatic thaw, the number of Chinese tourists visiting the North has rapidly increased.

Between 1,000 and 2,000 tourists are currently visiting popular sites such as the North's side of the demilitarised zone in a single day, NK News, an online news provider, said.

The surge in Chinese tourism may have been seen by North Korean authorities as straining Pyongyang's limited hotel infrastructure ahead of the anniversary, it added.