SEOUL (AFP) - North Korea's Parliament has met to rubber-stamp Kim Jong Un's policies, but the leader himself was conspicuously absent as he prepares for two key summits with Cold War foes South Korea and the US.

Kim had been present at six out of eight previous Supreme People's Assembly (SPA) sessions held since he officially became party head six years ago, according to the South's Unification Ministry.

But he appeared to skip Wednesday's meeting, with the official KCNA news agency failing to mention his attendance in its report of the meeting on Thursday (April 12).

Photos carried by the North's official Rodong Sinmun newspaper showed an empty seat at the centre of the head table in Pyongyang's cavernous Mansudae Assembly Hall, presumed to be Kim's.

Instead, the session focused on North Korea's budget and changes in leadership personnel.

“It appears Kim did not attend because he can’t issue a special message given the current volatile situation,” Koh Yu Hwan, professor of North Korean Studies at Dongguk University, told AFP, referring to the upcoming summits.

But the detailed state media reports of Monday’s politburo meeting mean North Koreans “will assume their leader is trying to improve external relations”, he added.

Kim is due to meet with the South's Moon Jae In on April 27, and is expected to meet US President Donald Trump weeks later.

On Monday he briefed party members on talks with the South and the "prospect" of dialogue with the US, in an unusually well-publicised politburo meeting. 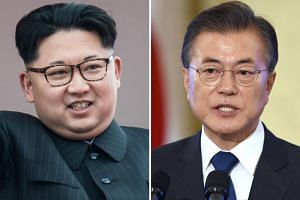 Officials in the South had earlier said they were watching the SPA closely for "any changes to policy directions".

But KCNA reports on the meeting focused on budgetary matters, with the nuclear-armed state's national defence allocation remaining almost unchanged at 15.9 per cent.

The North confirmed that Hwang Pyong So - once seen as one of Kim's closest aides - had been "dismissed" from his post as the vice chairman of the State Affairs Commission along with three other officials.

Seoul's spy agency said last year that Hwang and Kim Won Hong, the head and deputy head of the military's powerful General Political Bureau, had been punished for showing "impudence" towards the party.

All of the dismissals were made "at the proposal of the chairman of the State Affairs Commission", a post held by Kim Jong Un.

But votes at the rubber-stamp institution are invariably unanimous, with delegates from across the country travelling to Pyongyang simply to listen to speeches and wave through decisions by a show of hands.