SEOUL (AFP/REUTERS) - North Korean leader Kim Jong Un has said the country's nuclear weapons must be ready for use "any time", in an expected ramping up of bellicose rhetoric which drew a strong rebuke from neighbour South Korea, whose leader vowed to issue a "stern" response to any military provocation.

"We must always be ready to fire our nuclear warheads at any time," Mr Kim was quoted as saying by the North's official KCNA news agency on Friday (March 4), ratcheting up the North's rhetoric after the United Nations Security Council's adoption of tough new sanctions on Pyongyang.

Mr Kim also said his country should turn its military posture to a "pre-emptive basis" because enemies are threatening the state's survival, according to KCNA.  Such bellicose rhetoric is almost routine for North Korea at times of elevated tensions.

In response, South Korean President Park Geun Hye in a televised speech said: “If North Korea launches a provocation, we must respond with stern punishment to clearly show the price North Korea has to pay and our determination to protect our nation." 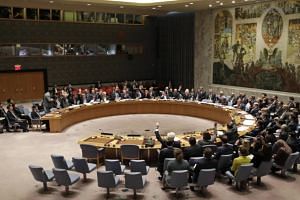 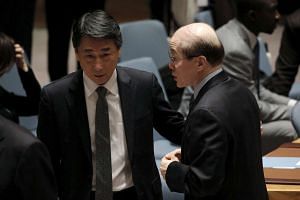 A look at sweeping new UN sanctions on North Korea 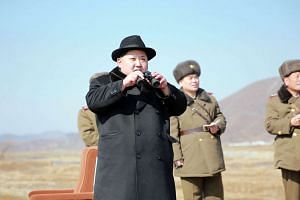 While the North is known to have a small stockpile of nuclear warheads, experts are divided about its ability to mount them on a working missile delivery system.

According to KCNA, Mr Kim made his comments while monitoring the test firing of a new, high-calibre multiple rocket launcher on Thursday (March 3), just hours after the UN Security Council resolution penalising the North for its recent nuclear test and long-range rocket launch.

South Korea’s defence ministry said the North had fired half a dozen rockets about 100-150km into the sea off its eastern coast on Thursday.  In a clear threat to neighbouring South Korea, Mr Kim said the new rocket launcher should be “promptly deployed” along with other newly developed weaponry.

“At an extreme time when the Americans... are urging war and disaster on other countries and people, the only way to defend our sovereignty and right to live is to bolster our nuclear capability,” Mr Kim said.

The US-drafted UN resolution adopted by the Security Council late Wednesday  (March 2) laid out the toughest sanctions imposed on Pyongyang to date over its nuclear weapons programme that will, if implemented effectively, apply significant economic pressure to Mr Kim’s regime.

The resolution breaks new ground, sanctioning specific sectors key to the North Korean economy – such as mineral exports – and seeking to undermine the North’s use of and access to international transport systems.