The meeting, on the north side of the truce village of Panmunjom, started at 10.11am Seoul time (9.11am Singapore time), according to South Korea’s Unification Ministry.

Discussions will be on issues including the artist troupe that North Korea plans to send to the PyeongChang Games, the route that delegates will take south and details of performance schedules, according to Yonhap News Agency.

“The art troupe’s planned visit is drawing a lot of interest and expectations internally and externally,” Lee Woo Sung, a senior official at South Korea’s Ministry of Culture, Sports and Tourism, said in televised comments on Monday. “We will coordinate calmly to yield a good agreement.”

Hyon Song Wol, who is known as the leader of the all-female band Moranbong, has been also chosen to be part of the delegation.

Established in 2012, the 10-member band is known for its Western-style, synthesizer-driven music and sophisticated fashion style rare in the isolated nation, although most of their songs laud the regime.  Their numbers include the jaunty Mother’s Birthday, about the ruling Workers’ Party of Korea, and the more soulful We Call Him Father, an ode to leader Kim Jong Un.  Such lyrics could fall foul of the South’s National Security Act, which bans praise for the North.

The band once cancelled a planned performance in Beijing in 2015 and returned home after Chinese officials took issue with propaganda images on the stage featuring Pyongyang’s long-range missiles. 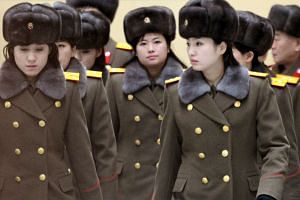 The South Korean delegation will be led by Lee Woo Sung, head of the culture and arts policy office at the Culture Ministry, and other members include Korean Symphony Orchestra’s CEO Lee Won Choul, its artistic director Chong Chi Yong and Han Jong Wook, who heads an inter-Korean dialogue division under the Unification Ministry’s Office of Inter-Korean Dialogue.

As key officials from each nation’s top orchestras are to meet face-to-face, the possibility of a joint musical performance at PyeongChang has also been raised by local media.

In the first round of high-level talks between the countries in more than two years, North Korea said last week it would send a delegation to the Olympics. The regime plans to have officials, athletes, a cheering squad, art performers, observers, martial artists and reporters attend the Games in the ski resort not far from the border.

North Korea’s planned participation in the Winter Games starting on Feb 9 brings potential benefits to the troubled Korean peninsula, which has been divided for about 70 years.

Kim Jong Un gets the opportunity to ease the global pressure on his isolated regime, while Moon can bet on a more peaceful Olympics and claim a victory in his push for dialogue.  The two nations, which are still technically at war, agreed in a joint statement to hold military talks and further high-level dialogues. North Korea took issue with South Korea raising the issue of denuclearisation during the meeting, with its top delegate issuing a “strong complaint” to his counterparts from Seoul.

North Korea has also yet to respond to South Korea's suggestion that the two Koreas jointly march during the opening ceremony, which has become a symbol of inter-Korean harmony through the years. Seoul officials said later that the two were getting closer to an agreement on a joint march.

Meanwhile, the North said the future of inter-Korean relations depends on South Korea's efforts to create a mood of "reconciliation and unification" between the two countries, in an editorial published in its state-run newspaper Rodong Sinmun on Sunday.

Closely following Monday's meeting, separate South-North talks will take place on Jan 20 at the International Olympics Committee headquarters in Lausanne, Switzerland. The meeting organised by the IOC is expected to act as a platform to further fuel North Korea's participation in the Winter Games.

Chang Ung, North Korea's representative to the committee, told a group of reporters Saturday that the IOC is considering the option of creating a joint South-North women's hockey team at the Winter Olympics. Chang was stopping by Beijing's Capital International Airport on his way back to Pyongyang from a visit to the IOC in Switzerland.