BEIJING (REUTERS) - Chinese Finance Minister Xiao Jie on Tuesday (March 7) downplayed the lack of defence spending numbers in this year's budget as there had been in previous years, saying there was no problem with transparency in state spending plans.

The finance ministry released the 2017 budget report on Sunday and the omission of the closely watched defence spending projection immediately sparked questions about whether Beijing was intentionally trying to conceal the amount it spends on its rapidly modernising military.

On Monday, the state news agency Xinhua finally released the number, quoting an unidentified Finance Ministry official as saying that defence spending would rise this year by 7 per cent to 1.044 trillion yuan (S$214 billion).

The omission of the figure from the annual budget report marked a break with years of tradition.

"I can unequivocally tell you that the so-called 'non-transparency' issue does not exist," Xiao told a news conference during the annual session of the National People's Congress (NPC), or parliament, in Beijing.

He noted defence and foreign affairs spending plans were factored into drafts of the budget "and there was no need to repeat them in the budget report".

The budget increase, a figure that is closely watched around the world for clues to China's strategic intentions, comes as economic growth has slowed, with a target of about 6.5 per cent for the year. 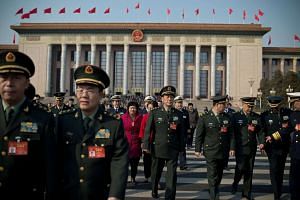 China's military build-up has rattled nerves around the region, with its increasingly assertive stance in territorial disputes in the East China Sea, the South China Sea and over Taiwan, which China claims as its own.

Even with the rise of 7 per cent, China's defence spending amounts to only about a quarter of the US defence budget, though many experts believe its actual spending on the military to be higher than the official figure.

Last year's budgeted hike of 7.6 per cent was the lowest in six years and the first single-digit rise since 2010, following a nearly unbroken two-decade run of double-digit increases.