TOKYO (AFP) - Record low snowfall in Japan has forced many ski resorts to shut their doors and is threatening a World Cup ski jumping competition, with organisers forced to truck in extra powder.

Northern Japan saw just 38 per cent of its average snowfall in December, with only a "little" snow seen in western Japan, the country's meteorological agency said.

The snowfall figures for December are the lowest since the organisation started collecting records in 1961, an agency official said on Thursday (Jan 16).

"There are various factors behind the small amount of snow this season, but climate change is among them," Mr Motoaki Takekawa, an official from the agency's global environment section, told AFP.

Daisen White Resort in Tottori, western Japan, has been shut since early January after opening over the year-end holiday thanks to a sprinkle of snow and 10 machines that pumped out artificial powder.

Since Jan 6, however, it has been so warm that even the fake snow has melted on the slopes.

"The shortage has battered not only our resort but snow-related businesses here such as hotels and rental ski shops," said Mr Masahiro Ozeki, an official at the resort. The slope is scheduled to partially re-open on Friday after snow fell on Wednesday.

"But we are still concerned about the rest of the season as less snow is expected in February," Mr Ozeki told AFP.

According to local media, more than a third of ski resorts across Japan have stayed closed since the beginning of the year.

In Zao, one of Japan's best ski resorts, organisers were trucking-in extra powder for the landing slope of a ski jump where the women's World Cup competitions will take place this weekend. 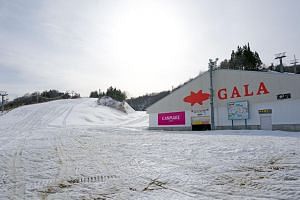 Mr Takahiro Oyama, an official from hosts Yamagata city, said there had been fears the competition would have to be cancelled over the "unprecedented shortage of snow".

"But since we have brought enough snow in to the landing areas, we are now going ahead with the event as scheduled this weekend," Mr Oyama told AFP.

The unseasonably warm weather has already caused headaches in northern Japan's Sapporo, where organisers of the city's famed snow festival have had to lay on a record number of trucks to bring in snow from the suburbs and surrounding towns to build their signature sculptures.

The festival, which runs for three weeks from Jan 31, is a major draw for the region, attracting more than 2.7 million visitors last year.

The weather agency's Mr Takekawa warned little relief is expected for ski resort operators. "The warm winter is forecast to continue for now," he said.