The need for military leaders from the region to continue building personal ties was underlined yesterday by Singapore Defence Minister Ng Eng Hen, who said such rapport would help ease tensions and prevent miscalculations.

He was speaking at the first plenary session, on the theme of international security governance, of the Xiangshan Forum in Beijing.

It comes days after defence ministers from Asean and eight key partners, including China and the United States, met in Singapore for the annual Asean Defence Ministers' Meetings (ADMM)-Plus.

"Here is a thriving example of China taking pains and expending much effort in contributing to and shaping the common regional security architecture," Dr Ng said.

"That defence ministers could and should meet regularly, exchanging views and ideas rather than bullets and missiles, is a modern concept and a virtuous one," he added.

"To quote Winston Churchill: 'To jaw-jaw is always better than to war-war'."

In his speech, Dr Ng said history showed that China cannot be isolated from the world if it is to thrive.

When other agencies between states have disagreements, I think that those will be the exact situations in which defence ministries and their militaries must not only maintain but strengthen communications to maintain the peace and allow diplomatic initiatives time to take effect.

He noted how its decline began sometime after the 15th century when it turned insular.

In contrast, the country made astounding progress after it began its economic liberalisation in 1978.

China is now the world's biggest trading nation, with total trade amounting to some US$4.2 trillion (S$5.8 trillion), and its peaceful rise has lifted more than 800 million people out of poverty.

"If there is any lesson to be drawn from these two Chinas - one in decline that started from the 15th century and one that is rising in the 21st century, it must be that even as large and venerable as China is, it needs the world, as much as the world needs China," said Dr Ng.

And as China's well-being is dependent on that of the world, and vice versa, it should continue and step up its engagement of others.

Dr Ng cited how the militaries of ADMM-Plus countries - which include Australia, India, Japan, New Zealand, Russia and South Korea - are engaging each other more than ever. Since 2010, they have held seven field training exercises bringing together more than 12,000 personnel. And six field exercises are slated for next year. 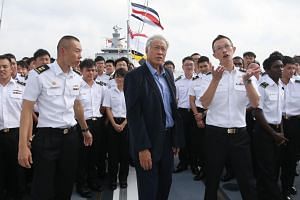 China and Asean should hold more and bigger maritime exercises in the future: Ng Eng Hen

Dr Ng said such interactions "build trust and confidence that can lead to even more significant institutional ballasts", citing the guidelines for air military encounters that Asean members adopted and their partners supported last week.

These positive developments should give countries encouragement to deal with more difficult issues, he added, citing China-US rivalry, tensions in the South China Sea and the nuclear threat on the Korean Peninsula.

"It is essential for our military leaders to build rapport, understanding and confidence through interactions at various levels. It is essential to build these personal ties that can prove very useful to de-escalate tensions and prevent miscalculations," he said.

"When other agencies between states have disagreements, I think that those will be the exact situations in which defence ministries and their militaries must not only maintain but strengthen communications to maintain the peace and allow diplomatic initiatives time to take effect."