About 79 metres tall and topped by a cross, the Xingsha Church is bigger even than the biggest statue of Mao Zedong in China, which is just 5 kilometres west of here.

On Tangerine Island, in the broad Xiang River, the massive granite head and shoulders of the revolutionary leader rear up as if surveying the world. But at 32 metres, the sculpture is less than half the height of the church.

That disparity, in the city where Mao spent his youth and first embraced politically radical ideas, has infuriated his most fervent admirers across China.

Sensing an ideological challenge to their hero - who founded the People's Republic in 1949 and denounced Christianity as a tool of foreign imperialism - thousands of Mao's "red" fans reached for their smartphones and computers this year and charged into verbal battle against this defilement of sacred ground.

They railed against the church's size and symbolism, saying that building it in a public space was a misappropriation of resources in the officially atheist state. 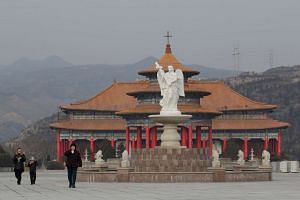 "Going for Christianity in a big way damages our nation's ideological security," wrote Zhao Danyang of the website Red Morality Think Tank, in a typical post when the furore erupted in February.

Wary of a political crisis, Changsha officials rushed to tamp down the controversy.

Guards were posted at the Xingsha Ecological Park, where the church, a Bible studies centre, administrative offices and residential quarters are near a Cupid Garden for local sweethearts. News reports vanished from the internet. Public debate fizzled. Multiple telephone calls to the provincial headquarters of the state-run Protestant association went unanswered. A bell jar of censorship descended.

But on the streets of Changsha, the capital of Hunan province, residents seem to know or care little about the clash of Christianity and Communism in their midst. Asked about it, several people shrugged and declined to comment, or said they had not heard of it.

If such grass-roots insouciance in Mao's former home seems surprising, to one resident it makes perfect sense.

"In Hunan, contradictions are not contradictions. They're normal," said Han Shaogong, author of "A Dictionary of Maqiao," a novel that explores the hilly region's extraordinary linguistic diversity. "Life here is a bit like Chinese food. Throw lots of different things into a wok and stir them around."

In the village outside Changsha where he farms and writes, Han said, Christianity coexists happily with other traditions.

"There are a couple of old ladies who believe in Jesus, but they believe in Buddha, too," he said. 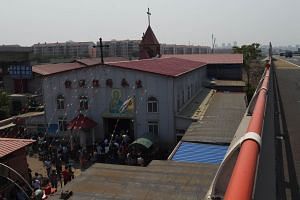 Although the Communist state suppressed religion as superstition until after Mao's death in 1976, it recognised five faiths - Protestantism, Catholicism, Buddhism, Taoism and Islam - which are managed through "patriotic" associations.

Estimates vary, but many put the number of Protestants at about 60 million, half of them adherents of the government-approved church, the rest worshipping in illegal "house churches".

A Protestant cleric at the Xingsha Ecological Park, who gave only his surname, Jiang, said Changsha's official Protestant churches had about 100,000 members.

Reminders of Mao's connection to the city are everywhere. His image, on wall-mounted illuminated boxes, decorates the new subway. Restaurants advertise his favourite dishes, including fatty red braised pork. Chiles, also loved by Mao, fire up the cuisine.

Wu Aiyun was one of several women distributing free shampoo samples near Mao's statue on Tangerine Island, where a riot of spring flowers bloomed. She barely paused when asked what Mao, who tried to crush capitalism, would think of them.

"I think he'd love what we're doing," she said. "That was then. This is now." Pointing at the stone ripples of Mao's hair, she joked: "He was a good-looking guy! Not bad hair!"

As a young man, Mao attended schools in Changsha, including a teacher-training college that charged no tuition and offered cheap board and lodging, he told Edgar Snow, as the US journalist recounted in "Red Star Over China."

"During this period my political ideas began to take shape," Mao told Snow. "Here also I acquired my first experiences in social action." He read Adam Smith and German philosophers in Changsha's public library, which opened in 1905 under the influence of Western missionaries.

Mao organised student and worker strikes in Changsha, helping shape a peasant movement of the kind that would later take all of China.

"We say, 'No man of Xiang isn't a soldier,'" Han said, using a local name for Hunan.

But the region is also known for its reverence for scholarship, he said.

"In Guangdong, in the south, a local hero would be a businessman. In Hunan, traditionally it was a scholar."

Reflecting both those soldierly and scholarly values, Mao went on vigorous treks through the Hunan countryside. He believed that the Chinese must become stronger if they were to throw out the imperialists and missionaries.

Changsha was a hub of Christianity. The Yale Foreign Missionary Society, later the Yale-China Association, was founded here in 1901, a connection that endures. New Haven, Connecticut - home to Yale - is developing a sister city relationship with Changsha.

"There once were many churches in Changsha, but many were knocked down," said Tan Hecheng, a Hunan native and former journalist whose account of a massacre in the province during Mao's Cultural Revolution, The Killing Wind, was recently released in English but cannot be published in mainland China.

Despite that suffering, to many locals Mao is a source of pride, his fame conferring status on the city and drawing tourism.

"Mao was a son of Changsha. And emperor. The most successful man in China. So he's a great asset to Hunan and Changsha," Tan said.

"Belief in the party has died, and everything today turns on advantage and disadvantage," he said. "Under such conditions, people don't care about anything, really. Mao is fine. Christianity is fine. It's all kind of irrelevant."

More than two months after the controversy broke, the Hunan Protestant association is not commenting on what will happen with the church. But people linked to China's Christian circles said one possibility that had been discussed to appease critics was walling it off from the rest of the park and removing the cross.

Striking a compromise would suit the spirit of a place where people are tough but love, above all, a good time, Han said.

"During the revolutionary years, they were really busy," he said. "But now it's all eat, drink, play. You could say there's something degenerate about it. But isn't it also kind of adorable?"