"This issue has been discussed for many decades, and it would be naive to think that it can be solved quickly," Putin said after meeting Japanese Prime Minister Shinzo Abe on the sidelines of an economic forum in Vladivostok in the Russian Far East.

"But we are ready to look for resolutions that would work for both Russia and Japan, and which would be accepted by the people in both countries," he said, adding that he was sure relations would have "new impetus" following the talks.

Putin said Moscow and Tokyo have made some progress in building cooperation and economic ties on the four southernmost islands in the Kuril chain which the Soviet Union occupied at the end of World War II but are claimed by Japan.

The dispute kept the two countries from ever signing a peace accord.

After numerous meetings over the past few years between Abe and Putin, they have launched various economic projects on the islands in areas such as the farming of fish and shellfish, wind-generated energy, and tourism.

Since last year, the countries have also agreed on charter flights for former Japanese island inhabitants to visit family graves there. 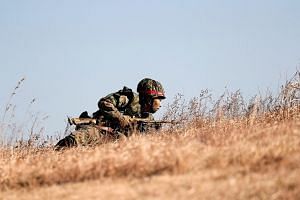 "I will continue to make utmost efforts with President Putin to bring an end to the issue," Abe told a press conference after the summit, according to a report in Japan's Kyodo newswire.

Abe added that they had agreed a "road map" to realise the economic projects on the islands.

The summit came just ahead of huge Russian military drills, which are set to start on Tuesday in eastern Siberia, involving some 300,000 troops as well as Chinese soldiers.

While Moscow has said the drills will not take place on the contested islands, Abe told Putin that Japan is "keeping a close eye on" them, according to Deputy Chief Cabinet Secretary Kotaro Nogami quoted by Kyodo.

The two also confirmed that Putin will travel to Japan on an official visit next year, Abe said.