North Korea has fired its first ballistic missile this year, in what is seen as a show of force against the leaders of the United States and Japan reaffirming their security alliance.

The missile, believed to be a mid-range Rodong or something similar, flew 500km and landed in the East Sea yesterday, drawing condemnation from world leaders.

Mr Trump said: "I just want everybody to understand and fully know that the United States of America stands behind Japan, its great ally, 100 per cent."

South Korean Acting President Hwang Kyo Ahn said his government was working with the global community to "ensure a corresponding response to punish the North".

The missile, fired from near Banghyon air base in the western province of North Pyongan, is North Korea's first provocation since Mr Trump was elected president. 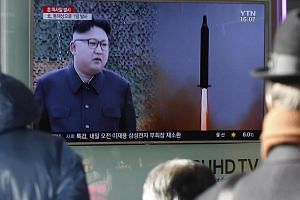 Ways to deal with a belligerent Pyongyang

North Korean leader Kim Jong Un had declared in a New Year's Day speech that his country was in the "last stage" of preparing to launch an intercontinental ballistic missile (ICBM) capable of reaching the US. State media warned that the launch could happen at "any time".

Pyongyang ramped up its nuclear programme last year, firing a flurry of 24 missiles and conducting two nuclear tests. Tougher UN sanctions, including cutting coal exports, did little to quell the North's nuclear ambitions. Its last Musudan missile was fired on Oct 20, three weeks before the US presidential election.

Experts said North Korea has been quiet in recent months so that it can observe Mr Trump, who had earlier claimed that he would host Mr Kim for talks in the US, and learn about his new administration's policy goals towards North-east Asia.

As it is now clear that the Trump administration is maintaining a hardline approach, it is no surprise that Pyongyang is "going back to its old playbook" of using missile provocations to see if the US would respond to its demands, said research fellow Go Myong Hyun of The Asan Institute for Policy Studies. "North Korea doesn't know any other way," Dr Go said, adding that it fired a less powerful missile instead of an ICBM to "leave room for escalation".

South Korea's Foreign Ministry condemned the missile launch, calling it a "grave threat" to peace in the Korean peninsula and the world. Mr Kim Kwan Jin, chief of the National Security Office in the South, spoke to his US counterpart Mike Flynn and both agreed to explore "all possible ways" to curb the North.

The Trump administration is expected to exert pressure on North Korean ally China to rein in Pyongyang's nuclear ambitions, but Beijing has maintained all along that dialogue is key to resolving the issue.

China's Global Times newspaper said in an editorial: "The North Korean nuclear issue is in a serious impasse... Given Trump's reputation for boldness, it is hoped that he will go beyond the lip service of the previous US president, delve into the deep reasons for the North Korean issue and have some action."

Dr Bong Young Shik of Yonsei University's Institute for North Korean Studies said the North's move will stoke debate over the planned deployment of the US Terminal High Altitude Area Defence (Thaad) anti- missile system in the South to guard against threats from the North.

The South Korean government has insisted that Thaad is necessary, but the opposition argues that it is aimed only at protecting US facilities in South Korea.

Mr Trump's statement, which did not mention South Korea, will only "add fuel to fire", said Dr Bong. "(It shows) the US is interested only in protecting Japan and its (US) forces (stationed) in the Daegu area. South Korea remains vulnerable, exacerbating concerns about the credibility of the US security umbrella."