SEOUL • North Korea has threatened to suspend negotiations with the Trump administration over the nation's nuclear arms programme, and said its leader Kim Jong Un would soon decide whether to resume nuclear and missile tests.

US Secretary of State Mike Pompeo said later in Washington that the United States wished to continue talks with North Korea, and had "every expectation" that Mr Kim would stick to pledges not to resume nuclear and missile testing.

But she said that Mr Pompeo and US National Security Adviser John Bolton had created an "atmosphere of hostility and mistrust" that thwarted the top leaders' negotiations last month in Hanoi, Vietnam.

After the Hanoi meeting ended without a deal, Mr Kim had serious doubts about the merits of continuing negotiations with Mr Trump, said Ms Choe.

"We have neither the intention to compromise with the US in any form nor much less the desire or plan to conduct this kind of negotiation," she said, according to a report from Pyongyang by the Associated Press, which has a bureau there.

I want to make it clear that the gangster-like stand of the US will eventually put the situation in danger.

MS CHOE SON HUI, Vice-Foreign Minister of North Korea, on the US' demands over her nation's denuclearisation.

Ms Choe also said that the North might end its self-imposed moratorium on tests of nuclear weapons and long-range missiles.

"Whether to maintain this moratorium or not is the decision of our Chairman of the State Affairs Commission. He will make his decision in a short period of time," she said, referring to Mr Kim.

"On our way back to the homeland, our Chairman of the State Affairs Commission said, 'For what reason do we have to make this train trip again?' " she said. "I want to make it clear that the gangster-like stand of the US will eventually put the situation in danger."

She said the US had thrown away "a golden opportunity" in Hanoi, adding that North Korea was no longer interested in negotiating unless Washington changed its "political calculation". 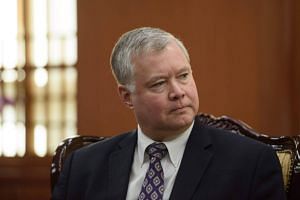 Yesterday, Mr Pompeo told reporters that it was not the first time he had been called "gangster-like" by North Korea. "And following that, we continued to have very professional conversations... I have every expectation we will be able to continue to do that."

Mr Pompeo said he had seen Ms Choe's remarks and that she had left open the possibility that negotiations would continue.

"It is the administration's desire that we continue to have conversations around this," he said.

"As the President said when he was in Hanoi, the offer that they made simply didn't rise to the level that was acceptable, given what they were asking for in exchange."

Mr Kim had committed multiple times to Mr Trump in Hanoi that he would not resume nuclear or missile testing, Mr Pompeo said.

"That is Chairman Kim's word. We have every expectation he will live up to that commitment."

The office of South Korea's President Moon Jae-in, who did much to broker the talks between North Korea and the US, said it was monitoring the situation closely.

"Whatever the situation, our government will try its best to help resume North Korea-US negotiations," it said in a statement.