Regime hardens stance as stalemate on nuclear talks with US continues, may pursue 'new path'

North Korean leader Kim Jong Un has lauded the test-firing of a "new-type tactical guided weapon", in what is seen as a move to ramp up pressure on the United States ahead of his planned trip to Russia.

His regime also demanded the removal of US Secretary of State Mike Pompeo from nuclear talks, while blasting Seoul for holding joint drills with the US despite signing an inter-Korea agreement to reduce military tension.

The Korean Central News Agency reported yesterday that Mr Kim supervised the testing of the weapon system on Wednesday and said its development "serves as an event of very weighty significance" in strengthening North Korea's combat power.

The weapon was said to have the advantage of a "peculiar mode of guiding flight" and its test involved "various modes of firing at different targets", suggesting it could be launched from land, sea or air.

Military experts also said it could be a short-range missile launcher - which means it was unlikely to threaten the US, but could target closer countries.

This marks Pyongyang's first weapon testing since the February summit between Mr Kim and US President Donald Trump in Hanoi failed to produce any new agreement in the path towards the North's denuclearisation.

While Mr Trump has reiterated that he is in no rush to push negotiations forward, Mr Kim said he would "wait with patience until the end of the year" for the US to change its attitude. 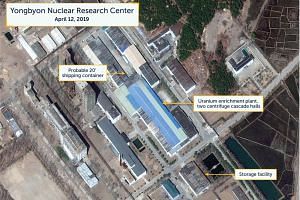 Pyongyang also signalled that it would rather have these talks without Mr Pompeo, who visited Pyongyang four times last year and was condemned by the regime for his "gangster-like" insistence that North Korea must denuclearise before sanctions on it could be lifted.

Dr Shin Beom-chul of Seoul-based think-tank Asan Institute for Policy Studies told The Straits Times that North Korea had tested the tactical weapon to exert pressure on the US and send a warning that "there could be more provocations next year if the US does not accept North Korea's conditions".

He added that the North could be demonstrating its will to pursue a "new path" if nuclear stalemate with the US continues - as Mr Kim declared in his New Year's Day speech. This new path would include economic self-reliance, possible military provocations, and more cooperation with Russia and China, noted Dr Shin.

News emerged yesterday that Mr Kim may ride his bullet-proof train to the Russian city of Vladivostok, possibly via China, for his first summit with Russian President Vladimir Putin next week.

This could send the message to the world that North Korea has the backing of both China and Russia.

Dr Shin said the Putin-Kim summit could yield humanitarian aid and food for the North, while at the same time boosting Russia's political presence in North-east Asia.

"It is President Putin's diplomatic success to meet Kim Jong Un," he said. "On the other hand, Kim Jong Un would want to show that the US is not North Korea's only option and that China is not its only partner."