HONG KONG - More than 30,000 serving and former police officers gathered on Wednesday night (Feb 22) in support of seven officers who were jailed for what a judge described as a vicious attack on a pro-democracy protester two years ago.

"The message is we support the families of the seven. We respect the judicial process. We are united in our stance,'' the officer said.

The huge turnout threatens to escalate an already significant chorus of criticisms aimed at District Court Judge David Dufton and the judiciary as a whole, the report said. 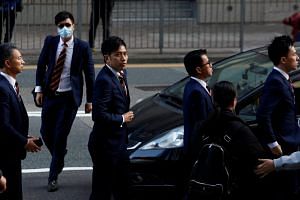 The seven police officers were jailed for two years last Friday. They were caught on video dragging Civic Party activist Ken Tsang, who was handcuffed, to a dark corner near a protest site, where they kicked and punched him repeatedly as he lay on the ground. 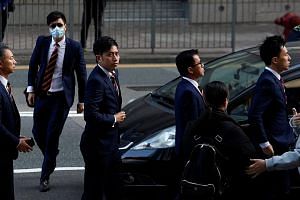 The incident took place on Oct 15, 2014, at the height of the 79-day pro-democracy protests - Occupy Central - that paralysed parts of Hong Kong, and posed one of the most serious political challenges to Communist Party leaders in Beijing for decades, Reuters reported.

The seven officers were convicted of assault causing actual bodily harm but were acquitted of a more serious charge of grievous bodily harm with intent.