Moranbong, a North Korean pop group formed by leader Kim Jong Un, abruptly cancelled a Beijing tour on Saturday (Dec 12) and headed home hours before they were due to perform.

They went to the Beijing airport and boarded a flight whose departure was delayed for several hours, BBC said.

Xinhua said the cancellation was due to "communications issues at the working level", but this did not quell intense speculation about the state of China-North Korean ties.

Here are some theories why they withdrew and the buzz about the band:

The snub was probably due to Mr Kim's claim last week that the North possesses a hydrogen bomb. Experts have dismissed his claim as unlikely.

The Yonhap report cited an unnamed source as saying the North had initially requested an audience that included President Xi Jinping or Premier Li Keqiang.

One North Korea expert cited by The Guardian said that Kim may have taken offence at stories circulated by South Korean media about a rumoured past relationship between Kim and a prominent member of the band. 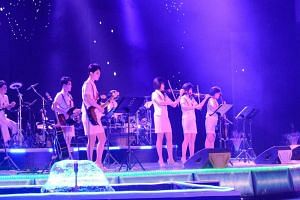 The gossip also made its rounds on Chinese social media.

China agreed instead to send one of 25 politburo members, but then decided to send lower-ranking officials.

Yonhap reported that the stories about Ms Hyon Song Wol undermined the "dignity" of the North Korean leader.

Another contributing factor may have been requests from the Chinese that the band tone down some of the more grandiose lyrics praising the ruling Kim family, The Telegraph reported.

Arirang News said that it could be related to a period of mourning in Pyongyang that was declared for late leader Kim Jong Il, during which singing and dancing were banned.

He died on December 17, 2011 and huge crowds in North Korea have marked his death anniversary since.

Although their performance was invite-only, the arrival of the band was covered widely and their rehearsal in Beijing was captured in a Reuters video.

Paparazzi photos were posted online of the girls in olive military-style winter coats.

Tickets for the China shows were reportedly sold on the black market for high prices, and the band was put up at a luxury hotel, reports said.

It was the first overseas performance for the band, which is known for its orchestral performances that involve electronic synthesizers, electric guitars and violins.

The band members are known to dress racily for North Korea, in mini-skirts and high heels, and are hugely popular with young North Koreans.

In 2013, rumours circulated in South Korea that Kim's former girlfriend Hyon had been executed, along with about a dozen other North Korean performers for making "pornographic films".

Reports even said their family members watched as they were shot. But she resurfaced in a television broadcast in 2014 in which she saluted Mr Kim for his "heavenly trust and warm care in promoting the arts", the New York Times said.

A Yonhap report said that when asked about the rumours, Ms Hyon only grinned and said: "Where do you come from?"

Despite being pressed repeatedly by reporters, she was tight-lipped and got on an elevator instead.