He tells Xi that he will send envoys to resolve N. Korean nuclear issue, Thaad row

In a move to mend ties with China, South Korea's new President Moon Jae In has told Chinese President Xi Jinping that he will send special envoys to Beijing for talks to resolve the North Korean nuclear issue and a row over the deployment of a US missile shield in the South.

They spoke on the phone for 40 minutes yesterday - the first conversation in eight months between top leaders from each side.

Mr Xi congratulated Mr Moon on his election and both exchanged views on a range of issues linked to the Korean peninsula, South Korea's presidential office said.

Their conversation came as talk emerged in local media that Mr Moon could use next year's Winter Olympics, hosted by South Korea, as a platform to restart dialogue with the North and pave the way towards a nuclear moratorium.

Mr Moon, of the liberal Democratic Party, is widely expected to improve long-strained ties with the North. But the new President, who won with 41.4 per cent of the vote, has also stressed that he would go to Pyongyang for negotiations only "under the right circumstances". 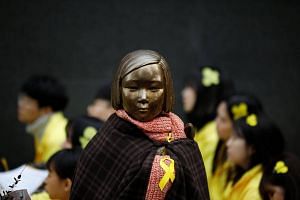 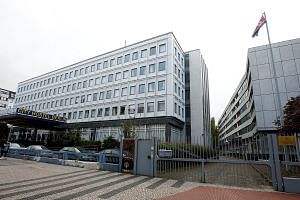 Berlin to close hostel owned by N. Korea in line with sanctions

In the first comments from the North after Mr Moon's win, the official Rodong Sinmun newspaper called on South Korea's new government to end what the paper called confrontational policies, including joint drills with the United States.

North Korea has also released satellite images of what it claims to be the Terminal High Altitude Area Defence (Thaad) system in South Korea, to show its ability to collect intelligence against Seoul.

Mr Moon is making a gesture to mend ties with China, but it does not necessarily mean he will revoke the missile system, said observers. He had said thatThaad was hastily deployed... (but) he also pledged to enhance South Korea's defence capability.

Yesterday, Mr Moon told Mr Xi that he is aware of Beijing's concerns over Thaad, which was put up in South Korea last month by the US to guard against the North's missile threats. "The issue would be easier to resolve only if North Korea stops its provocations," Mr Moon was cited as saying by his press secretary Yoon Young Chan.

Beijing opposes the deployment of Thaad, as it fears the system's radar will compromise its security.

China has hit back by squeezing South Korea's tourism, entertainment and beauty sectors.

South Korean conglomerate Lotte, which gave up its golf course in southern Seongju county for Thaad's deployment, stands to lose up to 500 billion won (S$624 million) if most of its 120 retail outlets in China are forced to remain closed.

Mr Moon told Mr Xi many South Koreans and businesses in China are struggling. "He then asked President Xi to personally look into ways to resolve the issue," said Mr Yoon.

The two leaders also agreed to have a summit in the near future.

Mr Moon is making a gesture to mend ties with China, but it does not necessarily mean he will revoke the missile system, said observers.

He had said that Thaad was hastily deployed and should be reviewed by the new government. He also pledged to enhance South Korea's defence capability.

But given South Korea's reliance on the US as a security ally, it is "unlikely for Moon to deviate from the path" and get closer to China at the expense of the US, said Dr Go Myong Hyun of the Asan Institute for Policy Studies think-tank in Seoul.

He noted that Mr Moon spoke to Mr Trump first on Tuesday evening and then to Mr Xi yesterday.

While Mr Moon will agree with China's use of sanctions and dialogue to engage North Korea, he will not make promises on Thaad, said Dr Go. "It will be very difficult for Moon to convince anybody, not just the US but also the South Korean public, why he's going to change South Korea's stance on Thaad. It's a done deal."

South Koreans go to the polls to elect new president

A version of this article appeared in the print edition of The Straits Times on May 12, 2017, with the headline 'Moon sets out to mend ties with China'. Subscribe
Topics:
More
Whatsapp Linkedin FB Messenger Telegram Reddit WeChat Pinterest Print Purchase Article Copy permalink