HONG KONG - As Walt Disney readies to open its first Disneyland resort in mainland China by mid-year, its decade-old theme park in Hong Kong has tumbled back into a loss, portending challenges ahead amid the country's slowing economic growth, Bloomberg reported.

Here's a look at how Asia's other Disney theme parks are faring. 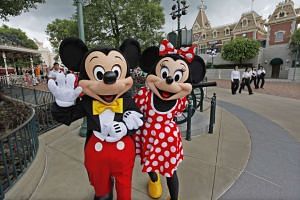 Visitor numbers: Traffic for the entire fiscal year expected to fall
3 per cent to 30.4 million for the fiscal year through next month. Attendance in 2013 and 2014 was up sharply, due to factors such as the park’s 30th anniversary and the launch of large attractions
Ticket prices: Starting from April 1 this year, adults will pay 7,400 yen (S$91) for a single-day ticket,
a 500-yen increase
Size: 200ha