HONG KONG (AFP, NYTIMES) - The family of a missing employee of Britain's consulate in Hong Kong said on Wednesday (Aug 21) that the authorities told them he was detained while returning from a business trip, but do not know why, where or how long he will be held.

The consulate has refused to name the man or give details about the incident, and a Chinese official said he was "not aware" of the situation.

But the family wrote on Facebook that his name is Simon Cheng and that he had travelled to Shenzhen in Guangdong province, an hour outside Hong Kong, for a one-day business meeting on Aug 8.

That night, Mr Cheng returned via high-speed train and sent messages as he was about to go through customs.

It said Hong Kong's Immigration Department, after consulting the city's trade office in Guangdong, "told us verbally that Simon has been administratively detained, but said that they could obtain no information on why, where and for how long he was to be detained".

He exchanged messages with her even as he was heading back to the border, aboard the recently opened high-speed railway that links Shenzhen to Hong Kong.

"Passing through," he wrote to her in English on WeChat, the Chinese message app, at 10.42pm that night. "Pray for me." 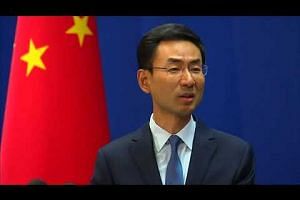 The family said it has received no notice of administrative detention. Lawyers have confirmed that Mr Cheng's case is being handled by the Shenzhen Municipal Public Security Bureau, but failed to ascertain where he is now, the family said.

"We feel very helpless, and are worried sick about Simon. We hope that Simon can return to Hong Kong as soon as possible," the family post said.

Hong Kong police confirmed they had opened a missing persons case on Aug 9.

Chinese foreign ministry spokesman Geng Shuang said: "I am not aware of the relevant situation."

Britain's Foreign and Commonwealth Office said in a statement on Tuesday that it was providing support to Mr Cheng's family and seeking further information from the authorities in Hong Kong and in the Chinese province of Guangdong, which includes Shenzhen.

"We are extremely concerned by reports that a member of our team has been detained returning to Hong Kong from Shenzhen," the statement said.

The incident comes as the financial hub faces its worst political crisis in decades.

Pro-democracy protesters have staged weeks of rallies that have often descended into violent clashes with police.

Beijing has taken an increasingly hard line against the protests, which it sees as a direct challenge to its rule.

It has also repeatedly warned Britain - the former colonial ruler of Hong Kong - against "interference" in the protests, and relations between the two countries have been increasingly strained over the issue.

The demonstrations were triggered by a controversial extradition law but have broadened into a call for wider democratic reforms.

China had promised to respect the freedoms in the semi-autonomous territory after its handover from Britain in 1997.

Hong Kong enjoys liberties unseen on the mainland, including freedom of speech, unfettered access to the Internet and an independent judiciary.

But the ongoing protests have raised fears of a Chinese crackdown.

It was not immediately clear why Mr Cheng had been detained, if indeed he was. China's police and judiciary routinely operate in secrecy, and security authorities in Guangdong did not respond to inquiries about the case.

Mr Cheng, a Hong Kong resident, worked for the consulate's branch of Scottish Development International, a trade and investment promotion office, according to friends and his Facebook biography. He holds a British national (overseas) passport, which entitles him to consular representation but does not allow him to work or live in Britain.

China does not recognise that status, which Britain created for Hong Kong residents before it returned the city to Chinese control in 1997.

Mr Cheng's disappearance, first reported by HK01, an online Hong Kong news organisation, prompted calls for another protest, this time in front of the British Consulate on Wednesday evening.

"The Beijing authority wants to create a chilling effect," said Mr Michael Mo, one of the organisers, who knows Mr Cheng. "It is a reminder that whether the extradition Bill is passed or not, there are still ways that the authorities can find to harass you by whatever means."

Ms Li, Mr Cheng's girlfriend, said an immigration official had told his sister that he had been placed under administrative detention, in which suspects can be held for up to 15 days without court hearings or access to lawyers.

"Simon's disappearance and detention without any reason will create panic among the investors and entrepreneurs globally," Ms Li wrote in a statement.

She said that under Chinese law, family members are supposed to be informed of where, when and why a person is detained, to ensure his safety. Mr Cheng regularly travelled to Shenzhen for work, she said.

"We just want Simon to come home," she said by telephone. "We don't want anything else."

Chinese border officers have stepped up checks on people crossing the border from Hong Kong. They have begun routinely searching the phones of people who enter the mainland from Hong Kong, apparently to identify people sympathetic to the protest movement and to prevent photographs or other information about the demonstrations from spreading to the mainland.